A Talk with the Kindred: A Graphic Novel Adaptation Creative Team
0 Comments

Take that in for a moment.

If you haven’t heard about it, get on board now because this visualization (Kindred: A Graphic Novel Adaptation) of the well-loved work is now available. 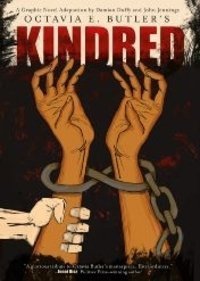 As a Butler fan, I was excited to hear about this venture and yet, I couldn’t help but wonder, “why Kindred?”  Beacon Press boasts Kindred is “the classic novel that has sold over 850,000 copies.”  The novel has been taught in high school and college English classes for years. Spoiled by my circles of writers, sci-fi lovers, and English teachers, I wondered, “Who hasn’t read Kindred?”

“It really surprised me how few people have heard about [the book],” Damian Duffy added.

The three of us talked about how, even today, there are those who have never heard of Kindred or Octavia Butler. Of course, when people get a taste of Butler’s work, they’re usually hooked which is how the creative duo got the opportunity to introduce Kindred to a whole new audience.

Duffy and Jennings met at the University of Illinois about 12 years ago when Jennings brought Scott McCloud (Understanding Comics) to the university and Duffy crashed a dinner. The two found they had “similar interests in what comics can do” with topics like social justice issues and, as Duffy put it, “it went from there.”

So in 2007, a publishing company put out a call for adapting Kindred into a graphic novel and Duffy and Jennings put a proposal together. That particular opportunity did not work out, however, when the two ended up at San Diego Comic Con in 2012, they were ready for an encounter with Sheila Keenan from Abrams ComicArts. She had recently come across Kindred and was very interested in adapting the book into a graphic novel. 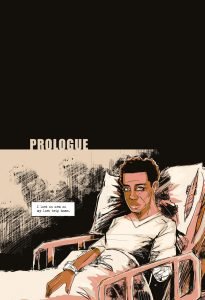 A page from Kindred: A Graphic Novel Adaptation

“Coincidentally,” Jennings explained, “the president of Abrams had been taking a night class, or something, and had also just come across [Butler’s] work and had been interested in revisiting her work in comic form. It just so happened that we were very experienced with the narrative and wanted to do it.” Five months later, they had the contract.

In reference to “why Kindred?” Duffy explained, “In one sense, a lot of what the story is talking about, in terms of identity politics and the impact of the past on the present, and gender issues, all that kind of stuff, stuff we had been working on in our own comics work. So we felt like there was such a confluence of issues and educational opportunities with this opportunity to adapt the book. It just seemed like a natural extension to work we had done.”

“In terms of why, overall, there’s the whole thing about using graphic novels to engage reluctant readers, readers who are more interested in reading comics than prose, and that kind of stuff. Look, I think people should read the novel too, but at the same time I feel like it’s a great opportunity to introduce Butler’s work to younger readers or just to readers who maybe had not paid attention to prose sci-fi, but do pay attention to graphic novels.”

Jennings added, “I come across a lot of people who either haven’t read science fiction and fantasy or they think that it’s kind of childish…they haven’t really engaged with the culture of science fiction but they’ve come across her work because it’s so grounded in social reality. She was actively using her narrative to deal with social justice aspects that you find yourself drawn to it because you can see the basis, not only in Butler, in science fiction and sometimes fantasy as a mechanism to talk about those kinds of issues in real life.”

Duffy addressed the fact that the current cover of Kindred makes the novel seem like a romance. The two admit that the novel is about a romance in “a really horrible, messed up way” but that the fantasy and Gothic horror aspects of the story aren’t really present in the dust cover.

Click the link below for page 2 of this article.