Check out Part 2 of our interview with #teamkamikaze! Read Part 1 here! 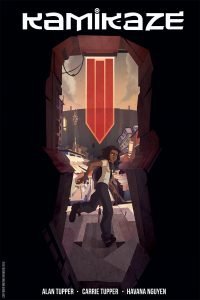 The cover for the collected edition of Kamikaze: Volume 1, Run, Rabbit Run

Upkins: What have been the challenges you all have faced pitching a story with a black heroine.

Alan: While I don’t think we ever directly got the “we have to pass because she’s black and a she”, there have definitely been times when we’ve been told that it’ll be a tougher sell. Sometimes you get the awkward pause and it’s hard not to read into it.  There’s also so much in the way of pervasive harmful stereotypes that we felt we had to be very deliberate about establishing Markesha as a engaging character first, systematically nullifying as many potential negative assumptions as was feasible.  We were there to pitch a science fiction series, but in some cases it felt like we also had to play the role of educator. There also seems like there’s a lot of in-built timidity about new things, and a propensity to hide behind “The Market” as a reason to validate their current preferences.

Carrie: On more of the comic side: I’ve noticed that skepticism has been something we’ve run into from people of color as well, and I don’t think any of us hold it against them. There’s this underlying assumption that anyone who isn’t of a certain race can’t write about someone of a certain race without falling into really harmful stereotypes. Even the name Kamikaze has given us some raised eyebrows. We do our best to combat this by engaging and being upfront about our reasoning, and letting people talk with us about their experiences. You’d be surprised how many people light up and get excited just because we listen to them and validate their concerns. We’re also really open to feedback of any kind and I think that also helps new readers decide to give us a chance outside of their initial impressions.

Upkins: Have you dealt with racism while trying to pitch and promote Kamikaze?

Havana: I haven’t really seen a lot of that yet but I do see SOME people of color approach it with some skepticism. I’m happy that in the end, they ultimately fall in love with our characters and become big evangelists. It’s a sign we’re doing it right, but that doesn’t mean to don’t pay constant vigilance to those issues. Is something stands out as egregious and LOTS of people critique the same thing, we are very much open to discussion and modification.

Alan: When it comes to promotion there’s only ever been a few instances where we get a real loonytoon at conventions. As a white guy, I’m not nearly as tuned in to microagressions as I could be, so there’s definitely the possibility that I’m missing or even perpetuating some. By and large, our experiences promoting have shown us a potential fan-base that’s open to and excited about a woman of color heroine, which is incredibly validating.

Upkins: But you haven’t given up, obviously. Would it have been easier to do a comic 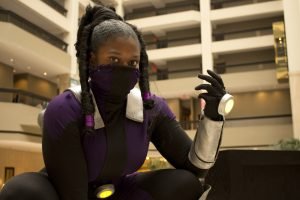 about a straight white male character?

Alan: Quite possibly, though I’m not certain Carrie, Havana, or I would still be working on it.  There’s enough stories about white men, and it’s really time to change up the mix.

Carrie: So, interesting tidbit: If you read the comic one of the very first characters you’re introduced to is Jackal. He’s blonde, blue eyed, and totally fit. We intentionally looked up every standard white, sexy, action hero actor that we could find and mushed them together into this WhiteHeroTM and then let him loose into the story. I won’t give anything away, but we do our best to make an example that our story isn’t going to work with the standard white male action hero. For me it was a way to show our readers that we were different while setting up the stakes of the plot and introducing the world. We have this in joke among Alan’s family that you have to set up an ‘example’ and well…Jackal really is our example of what we’re NOT looking for in a hero right now.

Upkins: What would you say to white creators who complain about diversity being too hard?

Carrie: At the panels the team presents we get asked this question a lot, especially after the Q&A is over because people are scared to ask this question. Personally, I think white creators who say diversity is too hard are simply saying that they’re scared of getting it wrong. No one likes to mess up, and it takes a lot of work to create something that rings true for people in your story that you’re trying to represent. I can’t say that I’m always doing a good job, but I try to encourage white creators who are interested in diversity to do the footwork, ask the questions, research and above all get uncomfortable. You have to learn, you have to listen, and you have to be willing to be wrong – I think a lot of white creators have a hard time with those ideas.

Alan: “Too” is a matter of will.  Is diversity hard to do right? Yes. But it is beyond worthwhile.  We live in a world where seeing the world through another persons eyes is no longer a nice-to-have.  As creators, we are creating material which will influence the opinions and behaviors of potentially countless people.  Use that power to make the world a better place.

Upkins: What’s been the fan reaction to the webcomic? 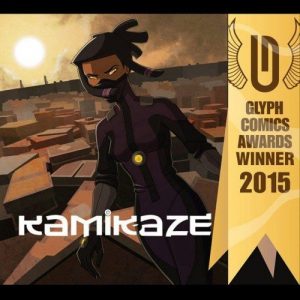 Havana: Seeing our fanbase grow has been a thrill. Momocon 2016 was very surprising because we got to meet more of our lurker fans. One fan at our panel even bragged, “I have been following these guys way before the comic, back when they were just posting pics and descriptions of the characters and Houses!” Our comic generates hipsters?! That made me smile. It’s still so surreal! How do these people find us?! Haha

Alan: Webcomics are a long game, especially with continuing narratives like Kamikaze.  It can be a bit discouraging at first because it feels like you’re playing to an empty room.  If you keep up with it though, you start building these fantastically strong ongoing relationships with readers.  It feels like we’ve cultivated a group of readers who really evangelize for us, which is a huge help.  The fan reaction in general tends to focus alot on seeing the next facet of the world and characters, whom they really get invested in.

Upkins: Kamikaze continues to gain serious momentum. Last year it won the Glyph Award for best webcomic. That must’ve been a surreal and incredible honor.

Havana: It was awesome to win the Glyph Award! Definitely unexpected. It was ALSO unexpected to be interviewed on NPR! It’s funny … I went to school for International Affairs and end up on NPR for a comic. Hah!

Alan: It was utterly surreal and humbling.  Being invited into the Black Comics community and meeting these incredible creators and pioneers was something that I’m still not sure I’ve fully wrapped my head around.

Carrie: Pretty much what Alan said. We have the award framed on our wall, and when I’m feeling unsure about what I’m doing I look at it. It’s a great reminder when I’m feeling down that I have to keep working hard. We must be doing something right to have that award on our wall.

Upkins: Any words of wisdom for aspiring storytellers?

Alan: Keep writing, keep sharing, and keep learning.  One advantage of running a comic is we always have to put something out each week, so it really helps nip the urge to be perfect in the bud.  Having access to fan responses as well as other creators has been invaluable, and it wouldn’t have been possible without constantly putting ourselves out there and opening ourselves up for critique.

Carrie: At MomoCon someone asked us, “When do you know you’re ready to put your stuff out 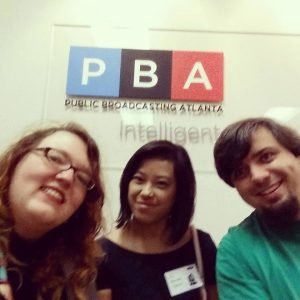 there?” I told them, “When you’re scared.” When you have something in your hands and it’s more or less done, then it’s time to hit the ‘post’ button. Swallow the fear, and put it out there. Know you won’t get successful over night, and if you do you’re going to be woefully unprepared for it. There’s no better place to start than at the beginning and so many new creators tell me they want to hone their craft. I respect that, and can totally understand that view point, but the problem lies in quantifying when you’re done getting better? At what point are you “good enough” to put your work out there? Creating is a process that always takes a lot of time, and if you’re not putting your stuff out there now, no one is going to see how far you’ve come. For real, if a poptart cat farting rainbows can make it, so can you.

Upkins: What lies ahead for #TeamKamikaze?

Havana: This book is going to be a turning point for us. It’s going to build credibility, generate revenue, and expand our fanbase faster than before. The transition from mere passion project to something that makes money will be interesting. The three of us are going to do all we can to prevent ourselves from ever letting revenue hurt the creative integrity of Kamikaze, but overall, it’s going to be an exciting new chapter. We are SO looking forward to being able to get the story in people’s hands right there. Our readership will grow, and we are looking forward to that.

Alan: We’re hoping the book will signal a new chapter for the Team.  We will definitely keep working on the weekly comic, but our hope is that we will be able to bring in more talent and expand the scope of the project.

Carrie: Personally, I’d love to see some animation tests done in the future too!

Head to https://gumroad.com/l/kmkzbook1 to buy Kamikaze: Volume 1, Run, Rabbit Run. To find out more information on the team and Kamikaze, head to Twitter @KamikazeComic, on Tumblr and Facebook as KamikazeAnimated. Also check out the mobile app Tapastic as Kamikaze.

Dennis R. Upkins is a proud Atlanta, Ga. native, speculative fiction author, and equal rights activist.
His  fiction credits include Stranger Than Fiction, Hollowstone, and West of Sunset. Upkins regularly critiques and analyzes the representation and portrayal of minorities in media and is a former staff writer for Comicbook.com. He’s also been a contributor for Black Girl Nerds, Prism Comics, Geeks OUT, and The Nerds of Color.
Article Topics: Alan Tupper | Carrie Tupper | Glyph Comic Awards | Havana Nguyen | Kamikaze | webcomic