The Importance of Diversity Even in A Galaxy Far, Far Away
0 Comments

**Warning: Minor spoilers will be all up in here. If you didn’t see the movie yet, turn back now.** 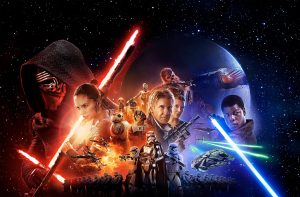 The first time I saw Star Wars, it was at my dad’s insistence that my brother and I watch it immediately. He presented us with a dusty VHS tape, like some ancient relic that had been passed down through countless centuries (or maybe just the late 70’s if you want to get literal). It would finally be bestowed upon his children, whose only interests resided with mutant teenage turtlesfrom the gritty underbelly of New York City. So my brother and I laid there on our stomachs, on the soft carpet of his bedroom, chins cupped in our palms, watching the iconic scrolling text backed by John Williams’ classic score, knowing that we were about to see something amazing.

I can’t honestly tell you how old I was at the time, but I remember being young enough to still be absorbed by the wonder of the film, but old enough to have an inkling that no one in that movie looked like me. Even on subsequent viewings of the entire original trilogy, even with the introduction of Lando Calrissian, and even after finding out that Darth Vader was voiced by the great James Earl Jones, it didn’t matter. There was still this inner conflict between how epic Star Wars was, and the fact that I was viewing it as an outsider, as someone the movies considered to be other even in a fictional galaxy far, far away.

The worst part is that everything about this was normal, not just for me, but for anyone who wasn’t white and heterosexual. The future belonged to one group of people, disassociated from the vast ethnicities, cultures, and identities that make our world so diverse. Even a movie like Interstellar, with its focus on a more scientifically accurate and realistic universe, envisioned a future that was largely homogenous and white. The same is true about many great science fiction movies I happen to love: Minority Report, Inception, The Fifth Element, HER, Ex-Machina, Guardians of the Galaxy and many more. Take your pick. Exclusion means seeing those worlds from a glass box, with permission to view but never to be included.

This absence of variety ill 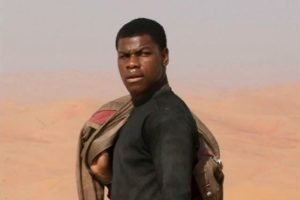 ustrates why diversity is so important: our fiction belongs to history, even in a galaxy far, far away. The significance of seeing someone who looks like you, in more than just a subservient or supporting role, can’t be understated.

J.J. Abrams has promised more diversity with the release of Star Wars: Episode VII, and has done something that most Hollywood films fail to do: cast people who are not white and male as leading stars. Just this act rejects the normalcy of one group, showing that a fictional, futuristic universe can include the same and much more.

Some have complained that Finn was a weak character, serving only to support the development of Rey, who turned out to be the main protagonist of the film. On the contrary, Finn had one of the most human and relatable arcs of any other character in the movie. He was a fledgling storm trooper who questioned the moral aspects of his mission. Even after defecting, his decision at one point to continue running from The Order instead of helping his new friends to protect the map and find Luke Skywalker did not make him cowardly. It made him human. Having been a witness to the murders and destruction The Order is capable of, Finn’s response to that fear was very honest. He chose to run so he wouldn’t die. That’s survival. That’s humanity.

At the end of it all, Finn decides to return in order to help everyone and save Rey in spite of that fear. This echoes his answer to Poe Dameron when he asked Finn, then a storm trooper, why he chose to help him. Finn simply says, “Because it’s the right thing to do.” That one line is the basis of Finn’s character, and the real source of his strength. As a person who has grown up seeing black characters reduced to token pimps, criminals, drug dealers and villains with no real insight into who they are as individuals, I would have loved the child version of me to see a black character make a human mistake, then bounce back from it the way Finn did. That’s what integrity looks like, and it’s a lot more important than how well he can wield a lightsaber. 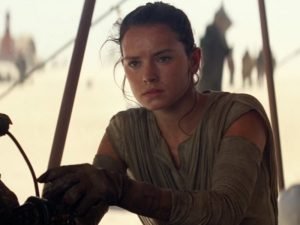 Rey was not without her weaknesses either. She lived a lonely existence on Rakku, salvaging any scraps she could find in order to have enough food to survive until the next day, when she could do the whole thing all over again. She spent her days waiting for the people who left her as a child to return, even though deep down she knew they would never come back. Finn’s dropping onto her planet literally changed the course of her life.

And still, even after living such a reclusive, isolated existence on Rakku, there is a point in the film when Rey longs to go back to that desert planet and continue living the way she always had, just so she wouldn’t have to go through the pain of facing The Order and what the visions of Luke Skywalker really mean for her. Now let’s have a moment of honesty here: How many of you have, at some point in your life, had the desire to continue on the familiar path out of fear of following the unknown, even if that unknown road might lead to something better? How many of you, right now, are afraid of change?

Keep that in mind when I tell you that Rey is exactly what a relatable character looks like, regardless of gender or race.

That is what true diversity is supposed to be. It’s not simply diversity in terms of ethnicity or gender. It’s diversity of circumstance. It’s finding that common human thread within the diverse framework of individual characters. Both Finn and Rey were protagonists of vastly different backgrounds, and yet both had relatable human qualities despite what they looked like.

In a world where a potential U.S. presidential candidate is calling for a ban on all Muslims entering America, where discrimination against Asian-Americans widely goes unnoticed and unresolved, where police brutality continues to kill black and Hispanic men and women at an exponential rate, where homoseuxal, bisexual, and transgender people risk death simply for being who they are, diversity even in a galaxy far, far away, humanizes people of various ethnicities, identities, and cultural backgrounds in a way that society often fails to do.

Somewhere in the world, there is a child who doesn’t look like you or me, who will be seeing Star Wars: The Force Awakens for the first time, and will remember it as a defining moment in his or her life fifteen years from now. That child might see him or herself in someone like John Boyega, Daisy Ridley or Oscar Isaac, and know that there is a galaxy beyond their own that exists with them in it.

Hopefully, in that span of time, our future will look more diverse in science fiction and other film genres than it ever has. Otherwise, we get movies like Gods of Egypt. And no one wants that.