The Power of Sheree
0 Comments 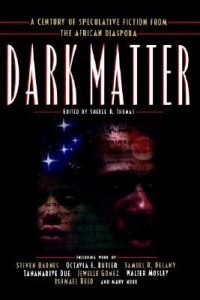 I always seem to have Dark Matter: Reading the Bones on my desk or table instead of sitting on the bookshelf. Hearing the voice of the woman who’d placed so many literary gems in my path would be a joy in itself. And then, she answered the phone and I was taken in by the power of Sheree Renee Thomas.

I asked about her writing life, such as when did she know she was a writer? “I didn’t really call myself a writer until really late,” she said. It wasn’t that she didn’t start writing until late, in fact, she’d been writing since she was a child. She remembered how her grandfather always had blank tablets and he’d give her one to write in and jot things down. “And if he didn’t have paper, he would give me the back of envelopes his bills came in and I would write on those.”

She had always been attracted to words and storytelling. She loved to listen to her parents, grandparents, and relatives tell stories; whether it be stories of the family history or funny stories from her parent’s childhood. “They just had a way of bringing a story to life.” She also learned a lot about black history by eavesdropping on her grandparents and their neighbors. “As a child, I was nosy, so I would listen to the stories while they were out there on the porch talking; and they would sometimes tell some serious stuff. I would be listening to how they would weave in different things and kind of paint these pictures and stuff with just their words. That was a powerful thing.”

She also credits her tradition of being in the church. She remembers her reverend being a powerful minister and even though half of the sermon was boring to her (unless they’d sing one of her favorite hymns or someone would catch the spirit) she loved the stories. “It was always cinematic to me. They would bring the stories of the Bible to life.”  She added, “so I think it was the word and the power of [the word] that was always in the background, so when I was old enough to really start writing my own work that was just an ongoing practice.” As for claiming herself as a writer, she’s not sure when she did. She wrote for the college paper and for independent black publications and magazines, “it was just something I did.”

So, I wondered, when she writes, who does she write for? “When I’m writing, to be honest, I don’t think about an audience. It’s not how a story comes to me. A story or character doesn’t come to me and I’m like ‘and you’re going to tell it to these people.’ So they don’t even exist. The audience beyond the story and me, that doesn’t exist. But when I started thinking about how I’m going to record [the story] that’s when I start to think about the audience.” This comes once she’s been writing the story for a bit. Still, thinking about the audience is a little more detailed when she thinks about her presentation. “There was a period in my life when I decided that I didn’t want to imitate anyone else. And I most certainly didn’t want to imitate mainstream voices.” She expounded on that with the notion that there are already so many individuals with individual voices, none needed her to add onto that. “So much of our education is about dead white writers. They’re already a part of the canon so the canon doesn’t need me to keep adding imitative work.”

She wanted to write works that people might enjoy and would take them to different places and see different things, 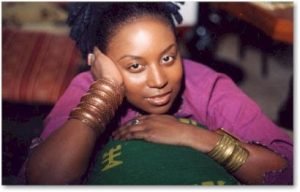 “but I also wanted to capture the voice and the cadence of the people I grew up with. I wanted to capture the dialect and the sayings of the people who raised me.” It is really important to Thomas that she record these things so that our “mother tongue” will never be lost. With that, she tries to keep things balanced so that she doesn’t overdo it with the dialogue. And she is also very aware of the stigma that applies to black Southern voices more so than voices from other places that may seem exotic.

We bantered on about how we may hear complaints from non-blacks trying to understand some of the dialogue of black writers. “I know I have labored through some work. I’ve labored through Faulkner and other writers to get through to the meaning,” she laughed, “so, you can do a little work for this.” This being her use of dialogue in stories like “How Sukie Cross De Big Wata,” and how this “risk” to use voice paid off because it’s really beautiful work. See Shotgun Lullabies: Stories and Poems. See Mojo: Conjure Stories. See So Long Been Dreaming, which Thomas raves about how each of the stories made her say “Wow!”

She noted that regardless of the space and time a story may be written in, black people are still going to be black. She explained that just because someone is placed into a sci-fi setting, they aren’t going to necessarily lose their native tongue and so that is why voice is so important to her when writing.

I asked how she got into writing science and speculative fiction. She said it was a good question and a tough question to answer but she went for it. “I grew up in a house where people loved to tell scary stories.”

Oh, yes. She had me hooked.

She explained she found she was attracted to some of the tales, the tragedies, and also to the traumatic stories of the Old Testament. She loved stories that left the most powerful image like the Pharaoh coming, and the plague. “I liked the drama. I liked the magic. I liked the power. And I liked the stories of the underdog discovering they have other skills and powers to help them survive.” When she was in school, if there was an assignment, she did anything to keep herself from being bored. So her stories wouldn’t be typical “I did this, I went here” kind of stories. If she was going to tell a story, someone was going to fly! It also helped that her parents were into science fiction. “It was just a part of me and how I’d keep myself engaged.” 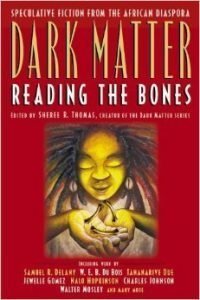 And that’s how this magical mind was nurtured so that later, we’d get a story I loved. “River Clap Your Hands,” was in her head for a long time and came about when so much was going on. Her mother had gotten sick and she left New York to be with her. Around the same time, Hurricane Katrina hit. Dark Matter: Reading the Bones was up for the World Fantasy Award and she was supposed to go but just wasn’t feeling it because she was in fear mode. Everyone around her was in fear mode with all of these families involved in the natural disaster. These were the stories she could follow closely as she was going in and out of the hospitals with her mom. These were the images that she revisited after the fact, when things had settled. And that’s where the idea of there being a mermaid in the Mississippi came from.

Why not a mermaid? I practically screamed. Of course, there’d be a mermaid story to come out of Hurricane Katrina! “When people feel their most powerless, then there are also opportunities to tap into power. It’s a crossroads moment.” She thinks about conjuring, folk magic, and voodoo: whatever the tradition they will turn to their magic for healing. “As a writer, I feel like my power and gift is in the word.”

Considering these uncertain times with so many people feeling powerless, I wondered if she could predict the next wave to hit science fiction. She said she’s busy exploring the worlds that are out there already; and also creating her own. “I am curious about Utopians though. Everything is dystopian now, so what’s the other part? What does Heaven look like?”

I asked how she got into editing books and bringing us anthologies. “Well, it was my day job. I worked in publishing.” She explained that as an aspiring writer, she wanted to know how to make a book. So she went to New York City. “I worked at Random House and learned from my mentors how to edit.” She worked in various positions that dealt with the stages of publishing a book from writing jacket copies to copy editing to writing a book under a pseudonym “that no one shall ever discover!” She needed to eat. She worked at Forbidden Planet, a science fiction bookstore. She did freelance proofreading, copy editing, and writing jacket copies. She also wrote book reviews. “You gotta be resourceful.”

She started Wanganegresse Press as an art project with two other friends, but she had no idea what kind of journey Dark Matter was going to take her on. “It took me to a lot of places. It was really powerful.” She explained, “Dark Matter just came out of my own need as a reader to create a book that I didn’t see in the world at that time. I was looking for Dark Matter. I was looking for that anthology.” She said she would go to Barnes and Noble and go through the shelves to get her next science fiction fix. “And I wanted to see us in it.”

I asked what role does she like more: writer, editor, or publisher? “Writing, of course.” But she explained each role has a different mode. “When you are editing, that’s a partnership. You are support for the writer. The writer has all the answers, but you as the editor, have to ask the right questions.” With publishing, “it’s a communal process. There’s you and a number of other forces to bring the book to life.” But, for someone who has been writing since her childhood, “Writing is just you. You’re the first and the last word.”

After a fabulous 2015 that let Thomas travel, work with amazing writers, and also have the most work of her own writing published in one year; Aqueduct Press will be releasing her new book, Sleeping Under the Tree of Life this year. She is also co-editing a double volume of Obsidian for their 40th anniversary. “That’s going to be amazing!” And then there are other projects she can’t talk about right now.

Her advice to girls that may want to follow in her footsteps is, “Get a good day job so you can eat and be safe. Read like you’re breathing. You can’t write without reading. Most of all, do not judge the story as you are writing it. Let it be what it is.”

Many thanks to Sheree Renee Thomas for letting her works be what they are because they’re fantastic.