The Khem Comic Book Fest is an annual convention that features creators of comics, books, film, and other media with a focus on artists and characters of color. The day is filled with entertainment and activities such as: Comic Book/Education workshops, a marketplace,  a comic book library and panel discussions and screenings with industry professionals. The goal of the event is to use comic books, films and popular culture to develop youth literacy and expression through S.T.E.A.M. (Science, Technology Engineering, Arts and Math). In addition, all proceeds from the Khem Comic Book Fest will go to the Central High School Engineering Academy Program.

In addition to comics, the Khem Comic Book Fest also highlights other genres such as speculative fiction, video games and collectible toys and models. The screenings include creative films, documentaries as well as animation. The festival has also become a diverse networking event for artists, writers and teachers as well as comic book enthusiasts and fans of cosplay, fantasy and popular culture for the attendees.

“The Khem Comic Book Fest is growing exponentially and I revel in the fact that through the festival we’re providing an opportunity to bring the entire community together.”

Those interested in becoming a sponsor, volunteer or purchasing tickets to attend can contact the organization through their website www.khemfest.com or email the festival director, Naseed Gifted directly at khemfest@gmail.com for more information.

(Phocused Black Star Media) is an innovative graphic media company that partners with the community to raise awareness and social consciousness through creative projects. Along with the development of the ongoing P.B.Soldier graphic novel series, the organization provides app development, apparel, and motion comics though it’s offices located in Newark, NJ. We serve as a “bridge in the gap” of the community.

#khemfest is the official hashtag of this event 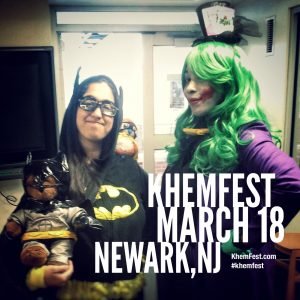