Why The Ultimates Are A Superhero Team We Need
0 Comments 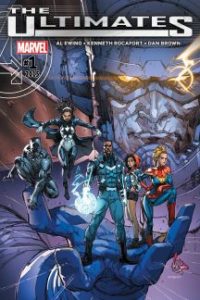 After seeing Marvel Comic films where superheroes either beat up the villains or each other, I wasn’t interested in reading any superhero team comics. Then, I started hearing about the newest version of The Ultimates. Since Marvel had made the first three issues available for three dollars through its Timely Comics line, I decided to give The Ultimates a try. Surprisingly, I was hooked and decided to buy issues four and five to see how things end up. As I found myself rereading the issues, it made me realize how The Ultimates stood out as a team and as separate characters.

In spite of my skepticism, my interest was piqued due to the team’s inclusive line-up. The members consist of Captain Marvel (a white woman), T’Challa/Black Panther (an African man), Monica Rambeau/Spectrum (an African American woman), Ms. America Chavez (a lesbian Latina). and Adam Brashear/Blue Marvel (an African American man). Although I’ve only read a modest amount of superhero comics so far, this team was the first team I’ve seen with almost all characters of color and no white men. If the comic could be written or drawn by a person of color as well, it would be close to perfect.

As a reader who only recently became a fan of superhero comics, it felt great to have so many characters of color to get a feel for and enjoy. My personal favorites include Miss America Chavez, Monica Rambeau, and Blue Marvel. America Chavez was the first character I loved because she can kick butt just by punching enemies with super strength and keep up with the older heroes. I also liked that she can open doors between different dimensions and gave me representation as a LGBTQ person of color. 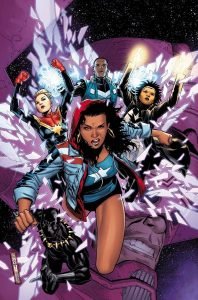 With Monica Rambeau, I thought that she and her power were beautiful and amazing. She transforms into pure light energy, flies, absorbs energy, and fires energy blasts. Although I love her costume, I believe that if she only had her light form she could become a goddess. When it comes to Blue Marvel, I love that he is a black super genius that can give epic monologues about science and life. He reminds me of a well-meaning uncle or grandparent.

Another aspect of the characters I enjoyed was that they are an inter-generational group of superheroes that respect each other. In the first issue, Monica Rambeau and America Chavez are fighting off  small flying blue aliens.  While she is in her light form, Monica notices that America is keeping up with her at light speed, moving in slow motion. Although she wryly says she feels old, Monica compliments America’s skills without feeling threatened by her. Given how some members of the older generation tend to belittle the younger one’s, this was a heartwarming scene to read.

The only thing that is more powerful than The Ultimates themselves is their compassion toward their enemies. By the end of the second issue, the team has transformed their enemy instead of killing him. By issue 5, that enemy returns the favor in a major way. Meanwhile, in issue 4, the compassion and morals of Adam Brashear is tested when he runs into an old frenemy thought dead. By continuing through the first five issues, compassion becomes a theme that is refreshing and memorable for the reader.

Even though I’ve only read five issues, I believe that The Ultimates should be adapted for the screen in the form of an animated series or film. In fact, an animated series might work best given the quick pacing of certain events. Not only would having The Ultimates onscreen be a great way for kids and adults to see themselves represented, but it might change the way people think about superheroes.

In one of the issues, one of the members of The Ultimates states that they are “the ultimate team to solve the ultimate problems”. Not only do they manage to resolve the problem of representation in mainstream superhero comics, but they also provide a different take on superhero stories in the first arc. For those who tire of the same old faces and fighting in superhero comics, The Ultimates might just be the team we need. 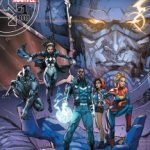 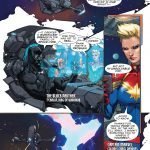 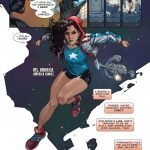 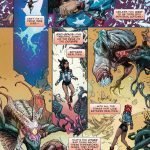 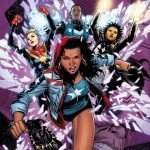