Comic book creator, URAEUS, went to the San Diego Comic Con with the idea of making a silent protest of wearing his #BlackHeroesMatter t-shirt.

In turn, his message went viral. Though he never expected anything like this to happen, URAEUS has been working 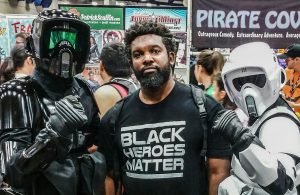 towards this movement for quite some time. His message is so inspiring, it should be contagious.

URAEUS, a visual artist by trade, has been drawing since he could hold a pencil. He majored in illustration at Morgan State University, then after 18 years in the industry, he got burnt out and turned to his passion of writing. He connected with other visual artists he knew and continued to make comics by supplying words to their amazing art.  He’s been creating comics professionally since 2004.

Around that same time, he studied history in grad school and became upset at all the back stories he’d never been exposed to in the history classes of his predominantly white high school. He took a study mission to Egypt where he saw black and brown people on the walls and in the tombs.

He started telling bedtime stories to his three sons about Jaycen Wise, the immortal scholar/warrior/adventurer, and his chronicles in time. When his children asked what Jaycen Wise looked like, the bedtime story ballooned into the well-known comic book superhero.

URAEUS feels comics can combine art with history. He created Jaycen Wise to teach children, and adults, about this historical legacy we have. To him, comics are a powerful learning tool because a creator can slip knowledge into entertainment. Because of this, comics can be a vehicle for social change.

So, now in 2016, his #BlackHeroesMatter t-shirt has made major waves at the San Diego Comic Con 2016 and at this years New York Comic Con. URAEUS saw some criticism suggesting the t-shirt was “a hack” and that he “co-opted #BlackLivesMatter and that it was a “bad idea.” However, in four months, #BlackHeroesMatter has been represented at many conventions and has been received very well.

He understands people will always link the two but, “The way I see it, #BlackLivesMatter identifies a very specific problem in this country…that black lives are less than or disposable, and dangerous. It speaks specifically to the violence in the black community whether it be by law enforcement or people who look just like us. On the other hand, #BlackHeroesMatter, to me, identifies the solution to the problem.” 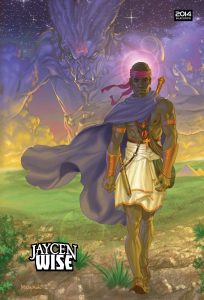 He isn’t saying it is the only solution. He knows there are many.

“#BlackHeroesMatter, to me, is an S.O.S. call to black creators, urging them to develop a new narrative, to construct new heroes, design new universes, and to give a holistic and balanced representation of black people and black culture,” Uraeus said.

URAEUS notes that in this country and abroad, we’ve allowed other cultures to paint our people as less than when in reality, history shows the opposite.

“We’ve contributed so much genius, we’re responsible for so many contributions. People don’t even know the greatness that we’ve shown.” He feels pop culture focuses too much on “the warts” of our community: the pimps, hoes, hustlers, etc. However, every community and culture around the world has something negative. He feels ours is focused on but it is only a small percentage of our population.

#BlackHeroesMatter doesn’t only speak to the creators of color to change the narrative but also to urge consumers to demand the same. “We speak with our dollars. We can say we’re not going to support that anymore. We demand to be represented as we are, beautiful, dynamic people. Of course there’s some bad but there’s brilliance and there’s beauty that no one sees.”

URAEUS says #BHM is nothing new. It’s what Marcus Garvey, Carter G. Woodson, W.E.B. Dubois, and Malcolm X had been saying: that WE define who we are.

Likewise, police brutality and racism is nothing new. It’s just that in today’s world, you see it instantly as it happens. 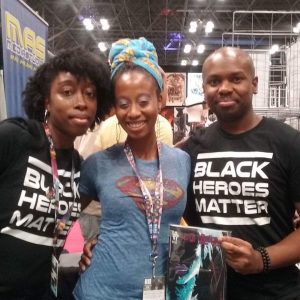 He notes Korryn Gaines who was livestreaming her altercation with police when she was killed in Baltimore. As for solutions, URAEUS says, “The easiest part we can handle is to look in the mirror and do a self-assessment. What can we change about ourselves? We’re not going to change a psychopathic system.” He stresses that comic book creators have the eyes of millions of children who are starving for heroes. He says the human mind is fickle in that it needs to see something to believe that it can be achieved.

“We have the power to put those heroes out there so kids can be like, okay, “I might not be able to defeat some arch villain but I can work to handle the problems in my community. I can be a hero, too.”

He says that’s what the superhero genre is supposed to be about, “to inspire people to seek the superhero within themselves and try to change whatever they can in their own community.”

What does URAEUS hope to achieve with the #BlackHeroesMatter movement? He hopes that it continues to go viral and that it will be a household thought embedded into the minds of creators and consumers alike. He breaks things down that since 1920, there have been over 200 superhero movies. Of the 200, only 10 of the superheroes are black, 6 or 7 are Asian, 0 are Native American. That’s about 180 white male superheroes with a few women thrown into the mix.

“Nobody should have a monopoly on saving the world,” the creator explained. URAEUS feels everybody should be able to sit at the table and their children should feel the potential within themselves to save the world, or at least solve some problems in their own communities.

Along with dealing with the demand for more t-shirts, URAEUS is working on a project for his character, Indigo. Indigo is a former child soldier turned female assassin who takes out the untouchables who’ve committed atrocities against humanity. In African culture, there is balance. If there’s a god, there’s a goddess. So Indigo is the strong, black female hero balancing Jaycen Wise. 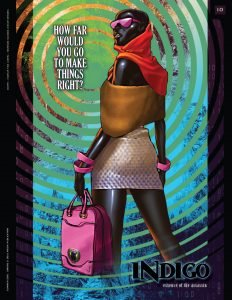 URAEUS signed with Skydance Productions (Mission Impossible, Terminator, Star Trek, World War Z) to produce Indigo as a live-action TV show.  NBC picked it up earlier this year but after URAEUS had gone through the development cycle, they passed on it. He’s been working with Dee Harris-Lawrence who wrote and produced for New York Undercover, and also with his mentor, Wesley Snipes, to  learn more about bringing his creation to television. He’s now in negotiations with Netflix and Sky TV to find a network home.

“Any way that we can, we need to try to place the heroes that we’re talking about not only on comic book stands…it’s about media, it’s about TV, it’s about movies and video games…so as creators of color, we have to make inroads to get to those places because that’s where we’re going to have the maximum effect.”

URAEUS goes on to call out our negative images in video games and how in movies, we’re always the sidekick. “We just can’t be a straight hero.” Fortunately, he sees that the playing field is leveling due to the various outlets creators have at their fingertips. Through self-determination, creators can get their positive images and messages out into the world, but the need to get equal representation in mainstream media continues to be a struggle.

To keep up with #BlackHeroesMatter, Indigo, and other ventures, follow URAEUS on Twitter @JaycenWise. Head to  www.blackheroesmatter.biz for more information.