— The goal of the ‘We Are Code’ virtual reality hackathon is to create a learning environment where students from underserved, urban communities can participate in STEM education and technology design, and explore careers in the rapidly advancing world of high technology. — 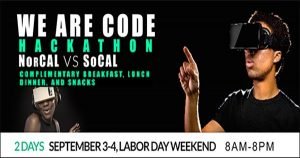 The objective of ‘We Are Code’ VR Hackathon is to ignite a passion for innovation and inspire youth of color to come up with their best mobile apps or website ideas that attempt to solve issues in their respective communities. Over the event’s two days, the hackathon will be transformed into a lively virtual reality space, where the youth take center stage with coding classes, interactive virtual reality sessions, healthy meals and refreshments, and extreme fun! Skills to be learned include communication, code thinking, teamwork, entrepreneurship, out-of-the-box thinking and much more!

This live-streamed competition between SoCal and NorCal students will allow finalists to exhibit their projects, prototypes or designs to a panel of professional judges to win cash and other prizes, along with the incubation of their ideas. The program is being designed to ensure two full fun-filled days with musical performances, community leaders, celebrity guests, space center simulations and an inspirational learning fest. 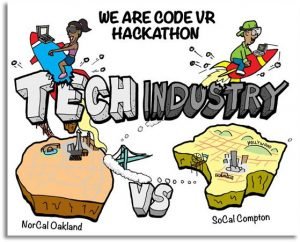 congratulations to Dhat Stone Academy (Compton) and Bay Area Tutoring Association (Oakland) – founders and co-producers of the “We Are Code” Virtual Reality Hackathon – for preparing youth in underserved communities to compete on equal footing for employment and entrepreneurship in the digital work space.”

For end of day entertainment, accomplished and versatile stage and film actor and singer Ben Vereen will be on-site in Compton, CA on both competition days. Vereen said, “Give the young people the tools they need today to make our tomorrow better and brighter with positivity.” Additionally, one of the 21st century’s most revered singer-songwriters and founder of the Agape International Spiritual Center Choir, Rickie Byars Beckwith, will perform two solo selections on Saturday evening. Acclaimed hip-hop rapper Nipsey Hussle will also perform live for the youth.

Dhat Stone Academy and Bay Area Tutoring Association are also delighted that Mary T. Duda, president and CEO of SCiOart Inc., will deliver the weekend’s keynote address. She is a Media Eco-System expert in Virtual & Augmented Reality and educational initiatives. Duda is the woman behind the buzz… “NASA meets NASCAR,” the Moon Racing Challenge (MRC), that is the first virtual gaming experience for PCs and arcade cabinets. MRC accurately renders NASA’s physical and topographical data of the moon, while sitting in a full motion seat that operates like a rocket ship on wheels. Duda infuses virtue into the virtual – creating games that are engaging, entertaining and enlightening.

The simultaneous live-streaming coding sessions and related activities will take place Saturday and Sunday, September 3-4, 2016 from 8am to 8pm at the following venues: