A few months back at BookExpo America here in New York, I was fortunate to speak with one of the publicity people at BOOM Studios. I talked about how I was a fan of their newest comic Destroyer by novelist Victor LaValle, and how I was ashamed to say I haven’t read his novels. After reading Destroyer, an amazing continuation of the Monster’s (from Mary Shelley’s Frankenstein) tale set in a world right outside your window, I was going to fix that situation a.s.a.p. LaValle, a native New Yorker, grew up in various Queens neighborhoods, spent his high school years reading horror novels by Stephen King and Shirley Jackson, and the hot comics of that time, the X-Men, Spider-Man and Batman. He comes to comics with a respect and passion for the genre that comes through with this continuation of a literary classic set in the very recognizable and modern world we live in. After a few rounds of email tag, I was able to speak with Mr. LaValle about this engaging project, Destroyer. 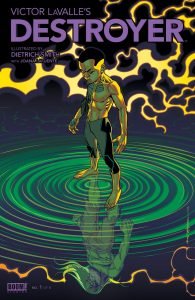 BlackSci-Fi.com: What’s your experience with comics as a fan?

Victor LaValle: I think the first comic I ever read was the Superman/Muhammad Ali giant size graphic novel. It’s not a good story at all, but it just stays with me as a great PR stunt that’s seared in my memory as something beautiful to look at. I would say I’ve loved comics since I was a kid. I consider it the beginning of my reading life for sure. It wasn’t prose, it was comics. One of the beautiful things about comics is that they’re being written by adults, but because it’s superhero stories, because of the illustrations, there’s a way as a kid you don’t necessarily feel shut out from the bigger words or the bigger ideas. In fact, it can make you look up some words. Comics can make you feel smarter without making you feel stupid, and that’s what I feel is amazing.

BSF: As a novelist, why bring this story to life on the comic page and not a full novel?

VL: I would say that I felt maybe confident or excited enough with the idea that I knew I couldn’t do it justice as a novel, I felt like it wasn’t a novel in the way that the story came to me. It began with a visual, the image of the Frankenstein Monster sitting on the iceberg. It’s not the amazing image that the artist (Dietrich Smith) came up with but it’s something like that. I basically saw everything up until the Monster crawling out of the water, returns to land and start his mission to destroy. I saw that opening in my head visually and thought instead of trying to turn that into words, what if I turn that into a comic and trust a really talented illustrator to make all that work. 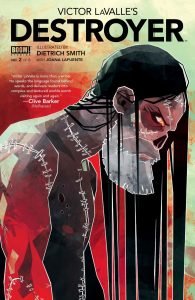 In the original novel he talks a lot, I think he talks a little bit too much, and what you’ll see from the opener of issue 2, a very explicit explanation of why he doesn’t speak, there aren’t too many monsters that stay scary the more they talk, except maybe Pinhead. He talks a lot and stays pretty creepy and Freddie, but those are just jokes. I wanted to avoid that. On some level the point of the monster is he doesn’t have to explain what he needs, he’s going to do what he needs and what he needs is the destruction of all human life and that becomes pretty clear quickly. Throughout the series he will eventually talk here and there, but it’s really minimal. I wanted to contrast that with when you hear from Dr. Baker and her son, who could explain themselves and when he can’t.

BSF: Then what is your process for writing?

VL: I think when I pitched this I did a synopsis of what the series is as a whole, about two pages, and they (BOOM Studios) liked that. From there they wanted a breakdown of what the arc would be, and then after we had a general idea about the whole story. Then they wanted me to breakdown issues by issue, essentially the plots for the characters. After we’d done all of the groundwork I finally got to write down a script, panels with dialogue, and for me that was very useful because I never done this before. I was new to comics. 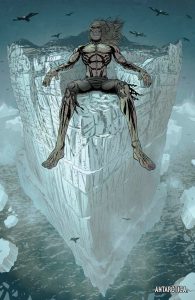 I learned a lot in the editing process because it’s just not the same kind of scroll in the novel you just go on and on and tangents, and the thing is the visuals are going to do a lot of the work. So you you don’t have to explain as much unlike a novel, you’ve got to make pictures with the words. I was able to turn in a script because of the work we’d done to really solidify the issues, it was relatively straightforward to simply write the actual script. Those outlines make life so much easier.

BSF: Why Frankenstein? When I look at Frankenstein, I bring my personal baggage, so I see a book about father issues wrapped around humanity’s hubris of being a master of nature, and the first issue seems to touch on ecology, artificial life forms, shadow governments, police brutality  and the families left in the wake of these tragic events.

VL: There’s a lot in there that’s true. The real heart of that is that my wife who is a writer as well as a teacher. She was recently teaching Frankenstein and she was like “you’ve got to read it”. The way she taught it in a class called the Literature of Birth, she looked at the book through the lens of essentially parenting as grief, as the idea Mary Shelley begins writing Frankenstein not long, a few months after her first child died, at two months old, and so all those things you mentioned are absolutely there. The theme I was thinking about, because my wife told it, was this idea you would make these leaps, you would have this hubris, the vanity or ego because of this understandable desire to bring back to life the being you lost, the life of a loved one you lost. 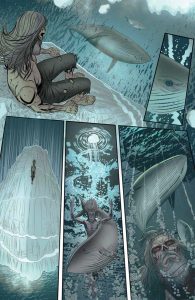 That was sort of percolating around 2015 and there’d been how many black people killed by the police that summer? I mean even today the cop that killed Castillo got acquitted. So I’ve been thinking of Frankenstein in that way and that summer, and again these parents or the loved ones standing at the podium, just racked with grief about someone they love being taken from them too early and I was just sort of thinking, “these motivations are very similar”. If I was one of these parents would you be willing to do anything to bring back that child or girlfriend or mother or father, and I was thinking “they would say yes, I would do anything”. So I was thinking this would be how I can make the Frankenstein story new again, but also come at it from an angle that is also deeply about that desire to bring back life simply because you’re almost insane with grief.

BSF: Do you want people to take that away as a warning, or simply what do you hope that they get out of this?

VL: Well I think on top of all the symbolism with all this current events, I want people to enjoy this book, because none of this matters if people don’t want to turn the pages, and I want people to be involved. I want them to just keep turning the pages, asking the question, what else can happen? How wild is it going to get? I really want that to be on the reader’s mind as the pages go by and they’re enjoying themselves. If they start thinking about these questions about what would I do? How far would I take things to that level for someone who’s been stolen from me? 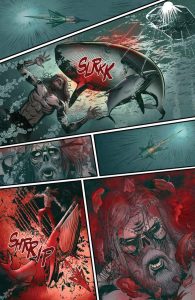 Would I do like Dr. Baker and go even farther, if I was in her position, would I be as angry as her or angrier, as angry as the Monster and give up on humanity entirely. Or would I be like the son who’s brought back, who still has hope for humanity, in spite of the fact he died at 12. He still has optimism, so the reader might think “which one am I and how would I react to such injustice”. And also, oh my god look at these amazing images. Between Dietrich Smith and Joanna Lafuente, I’m so amazed when they send back the art, I am amazed by what they are doing visually.

BSF: Will this be your only attempt at comics?

VL: This has been a lot of fun for me, in fact if it was up to me I would turn this into an ongoing series, because even as I’ve been doing this, I’ve already been imagining how I could keep going with it, and I have one or two other original stories. This Series has been like a gateway drug, if things could go my way at all, I would be writing more comics for sure, I love it.

As of this post, 3 issues of Destroyer have hit comic shops and I’m currently heading to my local book store for his novel The Ballad of Black Tom. For more of his writing follow him on his website victorlavalle.com, he’s also on Twitter and Facebook.

George Carmona 3rd is an Artist/Writer, former Milestone Media Intern, former DC Comics paper pusher, current book lover, and lifelong comic geek. When he’s not on the train reading, he’s writing for BlackSci-Fi.com. You can find his work at FistFullofArt.com or follow him on twitter at GCarmona3.