Why We Must Support Black Women In Indie Horror
0 Comments 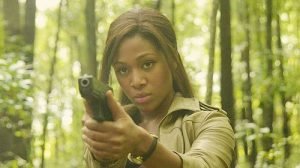 Recently, many viewers of the television show Sleepy Hollow were shocked and angered to see Abbie Mills, one of the show’s lead protagonists, killed off in the season finale. The role of Abbie Mills had been played by actress Nichole Beharie while Tom Mison played the show’s other lead Ichabod Crane.

To add insult to injury, the response by Sleepy Hollow’s current showrunner and former producer was blunt and insensitive. Jorge Molina tweeted something along the lines of “It’s just a character.” In an interview with Entertainment Weekly, Clifton Campbell stated that Abbie Mills was killed off was because she had done her part to help her partner Ichabod Crane.

For viewers of color like myself, Abbie Mills wasn’t just a black character. She was a complex black lead character rarely seen in horror shows and films. She was physically strong, emotionally vulnerable, smart, and loyal. She also had a poignant and sometimes hilarious bond with her fellow Witness, Ichabod Crane. 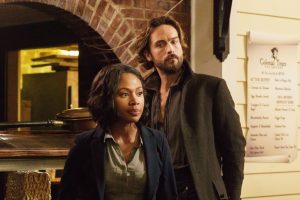 When the show first premiered in 2013, Abbie Mills was a no-nonsense police lieutenant who was skeptical of what she couldn’t see with her own eyes. Then, she is forced to team up with Ichabod Crane and discovers hard evidence that her mentor was murdered by a headless horseman. For the rest of the season, Abbie grows as a character by confronting her traumatic past, reconciling with her sister, learning more about her family heritage, and accepting her role as a Witness.

By season one’s finale, Abbie Mills was poised to grow even more as a Witness and a person. Instead, her role is reduced in season two when she assists Ichabod in rescuing his wife Katrina from purgatory. Not only does she end up taking Katrina’s place as a prisoner in purgatory in order to let her out, but she is also regulated to Ichabod’s sidekick when Katrina needs rescuing again. Even though Abbie Mills established herself as Crane’s equal, the showrunners and writers of Sleepy Hollow seemed to value the white characters more than its black female lead.

Many viewers complained about season two, but were still willing to watch season three hoping the people behind Sleepy Hollow had listened to their complaints. Not only were we proven wrong, but we were given a season that was worse than the previous one. Even before Abbie’s death, we still had to deal with her and Crane being separated for long stretches of time and Abbie temporarily sacrificing herself to save the world.

When season’s three and season two’s storytelling became lackluster, Abbie Mills and her bond with Ichabod Crane was the only reason I kept watching the show. Now that Abbie Mills is gone, viewers of color will have to find other media where they can enjoy themselves without having to worry about characters of color getting killed off. As I read the Entertainment Weekly article, I couldn’t help but think of an independent book series I have read that treated its Afro-Latina female lead much better than Abbie Mills.

The book series I am referring to is called The Black Parade and is written by a black female author named Kyoko M. The series focuses on Jordan Amador, a young woman who becomes a Seer who can see, hear, and talk to ghosts. Entering the world of angels and demons, she fights monsters inside and out to protect the world from harm.

Jordan Amador is similar to Abbie Mills in that she is a kick-butt, quirky, and troubled heroine. I related to her just as much I did to Abbie Mills, even if she did frustrate me sometimes. More importantly, she had great character development that was consistent throughout the series and I didn’t have to worry about her getting axed for good.

Many other black creators have taken matters into their own hands to create the stories and characters they want to see. Danger Word, directed by Luchina Fisher and adapted for the screen by award-winning writers Steven Barnes and Tananarive Due, is a short horror film about a 13-year-old girl and her grandfather who survive a zombie plague. R. Shanea Williams wrote and directed a psychological horror short film titled Contamination, which focuses on a black woman and her battle with Obsessive Compulsive Disorder.

Although my tastes in horror are limited to urban fantasy, this doesn’t mean that I won’t support black indie horror creators at all. We can’t just complain about characters getting killed off and not support creators who are doing things better.  It doesn’t take too much time to support them, especially when the majority of indie media is either easy on the pocketbook or free to enjoy.

Both of the short films previously mentioned are available to watch online via sites like YouTube and Vimeo. Meanwhile, the e-book versions of Kyoko M’s Black Parade books are either free (thanks to a limited-time deal set by the author) or cost three dollars. If you don’t have an e-reader, you can research lists of black horror writers and then check out their books from the library or buy them. Above all, you can spread the word about them. If indie creators are supported enough by their fans, then they will be able to give us more of what we want.