Will Smith to Star in Live Adaptation of ‘Aladdin’
0 Comments 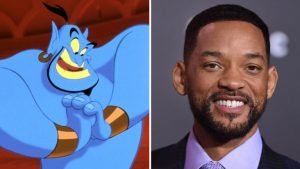 Who knew this was coming?  Will Smith is confirmed to star as “Genie” in Disney’s live adaptation of their 1992 animated film, Aladdin.

According to MTV News:

Your wish is Disney’s command: After months of speculation regarding casting for the live adaptation of their 1992 animated classic, Aladdin, the studio has confirmed that Will Smith, Naomi Scott, and Mena Massoud will be starring in the Mouse’s next major onscreen musical.

At Disney fan expo D23 on July 15, crucial production details were revealed for the Guy Ritchie-directed film: Aladdin is scheduled to begin shooting in London next month, with Scott playing Princess Jasmine, Massoud taking on the role of the dreamy street rat himself, and Smith filling the very big shoes of the late, great Robin Williams as the hilarious Genie.

The search for the right wise guy to play Aladdin was a grueling one, and involved Ritchie and his crew launching a casting call that saw 2,000 actors — including Dev Patel and Riz Ahmed — audition for Aladdin and Jasmine before they settled on Massoud, a rising star most recently spotted in Amazon series Jack Ryan, and Scott, who kicked butt as the Pink Ranger in Power Rangers earlier this year.

Aladdin will mark a return to comedy for Smith, too: Laughs abounded in 2016’s Suicide Squad, but his character, Deadshot, rarely cracked a smile in all that DC madcap action. They’re still looking for one well-known, sinister-looking dude to play Jafar, and same goes for the Sultan and scrappy Iago, too.

It’s a whole new (IRL) world, y’all, and one that will soon involve more magic carpet rides and plenty of antics from Prince Ali.

What do you think? Are you hyped to see Will Smith as “Genie”, or will Robin Williams’ shoes be hard to fill?