He Said What? Will Smith Explains Why Star Wars Is Better Than…
0 Comments 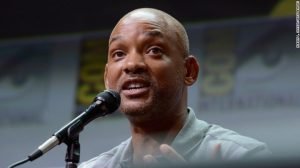 Will Smith’s passion for sci-fi runs deep.  So deep, that he recently compared it to his first time…you know. With roles in films such as I Am Legend, I Robot, Men in Black and his upcoming sci-fantasy epic Bright, Will Smith is definitely no stranger to the sci-fi genre. But who knew his love for sci-fi began when was a child? During a panel at this years SDCC, Will Smith speaks about the moment he fell in love with science fiction.

“I was probably 10 years old when Star Wars came out and I have never been smashed like that in a movie theater. My mind was boggled, for this generation you have seen magnificent things in movies. When I saw Star Wars that was all new, I was completely blown away and so my whole life I have chased that and tried to give that feeling to fans.”

“I had never matched that level of ecstasy [watching Star Wars]. Now, I had sex a few years later, but that probably didn’t match Star Wars.”

Check out the trailer for Smith’s upcoming film Bright here.