MONTREAL, SEPTEMBER 9th, 2016 – Miscellaneum Studios’ comic book series Z’Isle (pronounced ‘zile’) is getting the prequel treatment in the form of an upcoming indie video game adaptation. The zombie-filled, cyclepunk homage to Montreal will be a turn-based RPG (role playing game) gaming experience where players trust the stragglers they meet in order to not only fight zombies (feeders), but reclaim the city and build a new future.

Starting Thursday September 15th through to October 15th, the Z’Isle team is running a Kickstarter campaign in order to bring the game to life. Perks will include copies of the game the original comic book series, limited-edition silkscreen prints, cyclepunk weapons, props and instruments, and even creating missions and characters within the game itself.

A crowdfunding campaign is not only a way to fundraise for production but, like the comic series, ensures that community input will be an inherent part of the process, helping to shape and craft the world that is Z’Isle and ultimately, produce the best gaming experience possible.

“Those who make things are kings”

Z’Isle is a human tale incorporating themes of survival, societal equity and sustainability. Neighbourhoods have been reconstructed into fortresses against the onslaught of zombies (known as feeders) communities have formed alliances, Old World assets have become repurposed and upcycled, farming is ultra-local, and industry is fledgling at best. Those who can make things are kings and those who get too comfortable… die. Z’Isle takes direct inspiration from Montreal and its unique places, people and subcultures. Many characteristics that make Montreal unique will see new life in the world of Z’Isle, for better… or worse.

As a survivor of the outbreak, the player will be able to build their own character, recruit their own people, find resources and allies and venture on quests to fight feeders and other terrifying enemies, conquer more boroughs and reclaim their city. Survival is hard enough with the undead and rival groups, but could there be something even worse closing in?

“We are all familiar with Steampunk and Cyberpunk. Z’Isle is Cyclepunk,” explains Creative Director & Illustrator

Lateef Martin. “Montreal isn’t known for having a lot of guns, so we eventually run out of bullets. But we have a strong bike culture making them the most readily-available resource to make weapons, gear, and vehicles. This makes for some interesting weapons vehicles and gear unique to Z’Isle.”

Like many zombie stories before, the undead represent certain fears, be it of death, consumerism or ‘the other’. Martin decided to add another parallel to the mix. “In Z’isle, Feeders represent bias. Raised on media that is rife with stereotypes and tropes, we are raised with biases and can be susceptible to them if we aren’t critical of the type of images we consume. In Z’Isle, much like bias, Feeders surround the living and if one isn’t vigilant, they will be bitten and turn, becoming one-minded, focused on one limited way of thinking.”

The Z’Isle game will initially be released for PC with plans for X-box and Playstation versions. With a successful kickstarter campaign, we expect to release the game in late fall 2018.

It is a top down ¾ view 3D turned-based narrative RPG. It shares elements from X-Com, Darkest Dungeon and This War of Mine. Your 5-person crew must collect resources, claim territory ,trade with other groups and brain every feeder in your way. Each mission helps expand your Community. The diversity of your crew (gender, sexual preference, age, ethnicity, disabilities and neurological variances) can bring you closer together or drive you further apart. The choices you make through dialogue and combat affect your crewmates’ chemistry and the crew’s overall morale.

You can expand and upgrade your community by adding new facilities, defenses, guilds and recruit to grow your population. Your community will also serve to upgrade the skills and equipment of your crew members, heal them or switch members up. Your community has a reputation that is determined by how you recruit or reject prospective citizens. The higher your rep, the better-skilled and generally good people you attract and vice versa. Your community’s reputation can affect the types of allies or enemies you can make. It also affects your crew’s morale whenever they return from a mission.

The events that take place during your crew’s missions are recounted in the game’s Chronicle, a journal that summarizes the highlighted events of a mission, such as dangerous encounters, near-death experiences and bountiful loot finds, in the form of procedurally-generated text and comic illustrations-The player is the ‘Chronicler’ and the game is their unique story in the world of Z’Isle.

Montreal, Canada seven years after a zombie apocalypse. Bike-forged weapons & roof-bound communities have kept people safe. But for how long?

Diving into the bloody chaos of the city, Montreal readers should feel awkwardly at home reading the comic book series, while outsiders will get the chance to contemplate all the beautiful landmarks in their post-apocalyptic glory.

As fans of zombie lore, co-writers Isabelle Duguay and Lateef Martin sought to explore themes and ideas their favorite stories of infectious hunger for flesh hadn’t. What sets Z’Isle apart from other zombie-themed properties is its participatory nature. Miscellaneum Studios ran a crowdfunding campaign through Indiegogo November 2013 to help produce Volume 1 of the series (9 issues). 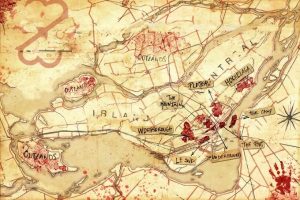 their own backstories, skills, weapons, and descriptions. The pages of Z’Isle are thus populated by characters created by Montrealers, (and a few Outlanders). Z’Isle also features local musicians such as Grammy-nominated MC Jonathan Emile and Alissa White-Gluz of Arch Enemy and actors Tamara Brown, Alison Louder, Tristan D. Lalla and more.

Miscellaneum Studios is a Montreal-based transmedia start-up founded by Lateef Martin. Its primary goal is to bring each of its IPs to all corners of geekdom through comics, games, web series, music and more. Our mission is to represent people of colour, women, the LGBTQ community and other marginalized communities in a non-stereotypical manner.

For more information on the Kickstarter head here.