This article assumes you’ve seen the movie Sorry to Bother You. Spoilers ahead.

Every day I’m expected to be complicit in my downfall.

This is not an easy thing to admit, and yet it’s true. In order to survive, I am expected to engage in tasks that economically supports people who use that power to oppress people like me. Every day I live as the base consumer of products and services created and maintained through exploitation while I step into my role in the machine of oppression. I am just one of many providing physical, emotional, and intellectual labor that is used to keep those with power, in power…and I call it survival.

Morality is a privilege…a luxury even. It’s not set by laws as laws have very little to do with morality and everything to do with power. Sorry to Bother You asks you to confront your morality alongside the protagonist, Cassius, as he sacrifices pieces of himself to capitalism and whiteness. The movie takes you on a journey that constantly asks the question of what you’re willing to sacrifice for survival, then comfort, then luxury, and finally opulence. We follow a man who just wants to make a living so he can maintain a home and his relationship. We see the fluidity of his morality instantly – he’s gone all out to show his potential boss that he’s a great employee, bringing a plaque and trophy exemplifying Cassius’ great work ethic.

It’s all a lie. But the lie allowed the hiring manager to see how flexible Cassius’ moral compass is and how far he’s willing to go to succeed. Cassius’ desperation makes him vulnerable and valuable in a world that seeks to use your weakness to its advantage. 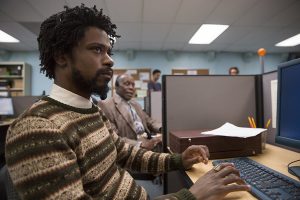 Cassius’ first step towards “success” was changing his voice. He learns that his ability to sell is directly linked to how he speaks so he alters his voice. He establishes a “white voice” and his sales increase dramatically. Next, he’s asked to sacrifice his co-workers and work relationships. He does this by accepting a promotion while his peers prepare to strike. Next, he sacrifices his honesty and integrity by selling Worry Free housing, which is essentially slave labor. The fourth sacrifice is his love/relationship, which happens naturally as he continues on his path to success. The final step, which was the most painful, was sacrificing his free will, becoming the performing monkey that capitalism and whiteness demands minus the illusions of control and agency.

The worst part was that Cassius saw what he was doing. Every step of the way, he made a conscious decision to prioritize money over the harm he was doing. Initially, it was understandable. His uncle was about to be evicted and they would all be homeless, something that has a significant effect on your ability to survive. But once the housing situation was resolved, Cassius had adapted to a different lifestyle, one where he could fill his gas tank with dollars instead of nickels and he didn’t need to live in his uncle’s garage. His normal became tailored suits and an expensive car. He knew he was selling slave pens, but if he was successful, it was fine. He’d crossed a line that he didn’t quite recognize because initially, his intent was good, and it solved an immediate housing problem. He became more focused on winning for the sake of winning instead of winning to take care of others. It is easy to opt into oppression – our history has made it so and those who benefit have no incentive to change it.

It wasn’t until he saw the literal monster his work was helping to create that he is able to start taking responsibility for the harm he was willfully doing. And because of how this country is set up to profit off the exploitation of others, virtually any form of success is a smaller version of that dynamic. It is a difficult pill to swallow. Several times throughout the past year, I’ve been confronted with the ugly reality that personal success in an oppressive system makes you an agent of your own oppression. And there isn’t a clear way to escape it. We see it time and again as Black people enter predominantly white spaces, and it’s a type of erasure that Sorry to Bother You explores.

As a young Black child attending a majority white school, I learned early on how to code switch. The way I talked around my friends wasn’t appropriate in the classroom. I wasn’t good at it. I’m still not. Most slang does not roll confidently off my tongue. My parents emphasized speaking in the way that would appease the white people who would control my progress in the educational system – my friends called it “talking white.” And even now, there is a different affectation when I speak in the office, running meetings, or interacting on the phone with white clients/customers/co-workers. People call it speaking “professionally” when really, it’s just a way to enforce white supremacy. Initially, my parents decided how I would speak, because they knew that success in a white supremacist country would require that skill and it became my normal. Later, when I realized how much of how I spoke was a choice, I would speak whichever way either kept me out of trouble and low-key helped me blend in with my environment. I’ll never comfortably use slang, but I do have a casual voice, a professional voice, and an “are these white people dangerous?” and how I employ them depends on the situation. Sometimes the situation is to opt-in to the same society bases my ability to survive on how well I erase aspects of myself.

This is the beginning of the downward spiral because to survive, you need to blend. And survival often gets conflated with success – a dangerous practice that blurs the line between necessity and desire. To survive financially, I am often expected to subvert my Blackness in any number of ways…just like Cassius. I am expected to adopt as many affectations of whiteness as one can to try to blend in, the way I speak is just one of them. It is the way one dresses. The types of shows you watch and music you listen to, and hobbies in which you engage. There are racist assumptions you are expected to play into; stereotypes you are imagined embodying. Time and again, you are reminded that you are not a person, but instead a caricature of Blackness that they project onto you, and to keep them comfortable, you are never meant to contradict it.

With one look, people assume they know everything they need to know about me, from my marital status to my dancing ability… To this day, there are times people are surprised by my appearance as according to them, I “don’t sound Black.” When you occupy any space as “other” you quickly learn just how entitled everyone feels towards identifying and cataloging you. You also realize that much of our identifiers are performative for the comfort of those around you. In many ways, I am not able to be me because my uncontrolled Blackness is frightening. Just ask all those white women calling the police for Black people existing.

Armie Hammer and Lakeith Stanfield in Sorry to Bother You (2018). Photo by Annapurna Pictures

It’s absurd how the existence of Black people is such a problem, especially when it’s not in service to whiteness, which, sadly, we can’t avoid. But as BBQ Beckie, Permit Patty, and Newport Nancy continue proving, white people don’t think our powerlessness is visible enough to satisfy them. It’s absurd the lengths white people will go to contradict the reality of Black people. They will legalize all forms of activities to penalize Black people. It’s why there are laws for minute shit like jaywalking and loitering. It’s absurd that we will watch a white person say and do racist shit and claim they were misunderstood because they said, “I’m not racist.” The absurd measures white people in this country go through to erase their racism is almost as absurd as Equi-Sapiens, also known as horse people in the movie.

I walked out of Sorry to Bother You disturbed and somewhat distracted by that twist, but even more so by the fact that despite everything that happened: the rise to the top, the loss of it all, the protests, the small win, the degradation and humiliation, Cassius was back in the entry-level position at the same company that he’d just tried, and failed, to destroy. The owner was given more wealth, access, and acceptance by hegemonic culture despite profiting off slavery and illegally mutating humans. The small win was the company’s new union, otherwise nothing changed. In fact, it’s almost worse because now he KNOWS what the company does and how working there is destroying lives to keep people obscenely wealthy.

It drives the lesson home: when you’re Black in a white supremacist country, your survival means opting in to your oppression. This begs the question whether knowing what you’re opting into is enough to begin change. For me, it has. Because it forced me to begin to contemplate a way out – a path to create something that wasn’t exploitative and dehumanizing. It helped me begin to conceive different options. None of them are feasible, yet, but I’m working on it.

I plan to work on it for the rest of my life.

TaLynn Kel is a writer, cosplayer, and podcaster in Atlanta, Georgia. She writes about racism, cosplay, interracial relationships, and pop culture fandom through the lens of social justice. She conducts panels on these topics at fandom conventions both in and out of Georgia. Her cosplay and essays have been featured by NBC, Safety Pin Box, Black Girl Nerds, Fabulize Magazine, Ravishly.com, Brit & Co, Huffington Post, and Punk Black.

Article Topics: sorry to bother you