Black Horror Out of the Margins
0 Comments

We are currently at peak Black Horror, a genre that was once marginalized itself and that has also been fraught with poor representation of Black characters is now seeing its heyday. With the 2017 critical and financial success of the social horror movie Get Out and now the domestic and international success of the recently released The First Purge a film in a popular franchise that focused solely on its Black characters, Hollywood is finally seeing that Black horror is both popular and profitable.

The irony is that horror as a genre in film has always skewed higher with minority and female viewers than other film genres, but only now have decision makers made the connection that films focusing on Black characters can be successful. The success of these movies is likely tied into the removal of the one stumbling block for most Black horror fans of horror films continually using the trope of the Black character(s) dying first and never being the hero of the film. However, the aforementioned films have flipped that trope on its head and focused on subverting the white gaze by making the Black characters the rational and heroic focus of these films as well as centering on current social issues as the catalyst for the horror elements in each film.

Horror fans can now rejoice in new stories where we are the heroes of these stories and not cannon fodder. That trend is also being reflected in literature with the popularity of Black horror authors such as Tananarive Due, Victor LaValle, and Linda Addison. With this renewed interest in horror at large and Black horror specifically I was delighted to meet Tonia Thompson the creator of Nightlight Podcast, a horror fiction podcast this past June at Blacktasticon.

Thompson is a lifetime horror lover and has created a podcast featuring horror fiction by Black authors to highlight and represent horror by Black creators. Thompson is a writer, book reviewer, and podcast host of Nightlight Podcast. After checking out our interview with the podcast host can learn more about Nightlight Podcast by going to their website: https://nightlightpod.com , listening on iTunes: http://feeds.feedburner.com/NightlightPod, checking out theirTwitter: https://twitter.com/nightlightpod , and supporting through Patreon: https://www.patreon.com/toniathompson.

Tonia was gracious enough to allow me to interview her and ask her about her podcast, the genre of horror, Black horror authors, and what she’d be taking with her in the inevitable event of a Zombie outbreak. 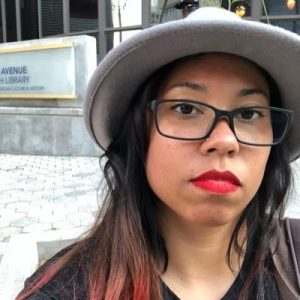 Q: What made you decide to create a Black Horror podcast?

A: I’ve wanted to start a podcast since before they were called podcasts and I’ve put it off, waiting for the “right time”. I went to the Austin Film Festival last year and they had a podcast track, where I was able to meet a lot of amazing podcasters. Many of them were in a position to have their podcasts spun into a TV series or movie and lots of folks were talking about how Hollywood has really been looking to podcasts for new material. But I was too busy at the time, and set it aside, again waiting for the “right time”. Then one day in late April, I decided there never would be a “right time” and that I just needed to do it and have faith that things would work themselves out. I’d been working on an audio drama, but that process is much slower and much more expensive. I also really wanted to do something to help support the Black horror community, and so NIGHTLIGHT was born. I’d really been admiring what FIYAH was doing in the magazine space and remembered how I’d wanted to start a podcast in which each episode was its own story and it all kind of came together in my head to be what you hear today.

A: Definitely. I grew up in the South and my family is very involved in the church, but I wasn’t—mostly because I’m mixed, and churches are so segregated that my parents never found a church they wanted to attend on a regular basis. White churches were a definite no-go and, while my white mother felt comfortable at Black churches, we’d often get a side eye from some of the church ladies that made it feel like a place we really didn’t want to worship. Instead, we read the Bible at night and had sort of our own service, so I’m somewhat distanced from Christianity, which I think made it a bit easier for me. Also, while I was in the process of writing my first novel, I was researching voodoo, and ended up discovering hoodoo, which I’d grown up with, but didn’t realize it was more than just southern superstition.

My grandmother and my father had since passed, and it was amazing to hear and read about all these things that I’d grown up with—red brick dust, burying jars under folks’ porches…all kind of stuff—and realize that my grandmother had practiced hoodoo. So yes, she was a Christian woman, but hoodoo was part of her and I’d never seen that kind of thing at odds with God. And I think for me, growing up in a community where the Devil was very real, made it okay to tell these stories about the occult and ghosts and Faustian deals. I’ve never gotten pushback from my family or anyone else I’m close to in the Black community—at least for my writing. My family supports me, but most of them don’t necessarily read horror, so they haven’t read a lot of my work to even be offended by it. But I think my dad was a big horror fan.

I would have never characterized him as such growing up, but looking back, we watched all the Black horror movies and “mainstream” horror movies. My dad wasn’t a big reader unless you count contracts and witness statements, and my mom read a lot of romance. But they both enjoyed horror films, and as I’ve gotten older, I realize how strange it was for my parents to watch so much horror, and to allow me to watch it with them. I think my love of horror stems from that, but it became something more of an obsession after I wrote a book in the second grade about a serial killer that was basically a Halloween rip off. It was a class assignment and I was so proud. I had so much fun with that project. We bound our little books and colored our illustrations, and mine, complete with sharp knives, corpses, and blood wasn’t exactly well-received by my teacher. I confused her fear for my safety/concern about my upbringing with having actually frightened her with my words and from that moment on I was hooked. I loved that power—to make people feel a certain way with my words, especially adults and my love of consuming horror became a love for producing it as well. 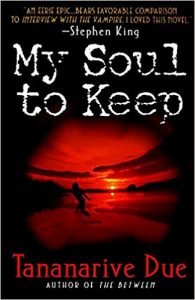 My Soul to Keep by Tananarive Due.

Q: If someone were new to reading horror as a genre, what Black horror works would you point them to as a starting point?

A: This is so hard because so many people recommend Octavia E. Butler or Tananarive Due, whom I love, but I feel like everyone recommends them as a starting point, and there’s so much more to Black horror than those wonderful women. I very much love Eden Royce, probably because I think she and I have very similar tastes in what we find horrific, but as of now, she doesn’t have a novel out, which I think most people are looking for. That said, I think short stories are honestly where some of the most talented people in Black horror are writing. I really loved Eboni Dunbar’s story in the July issue of FIYAH, as well as pretty much everything in Sycorax’s Daughters. I’d recommend FIYAH and Sycorax’s Daughter’s as a great starting point, simply because you’re exposed to so many stories by Black people to help guide you in determining what kind of writing you most enjoy. Horror is a personal thing and I think short stories are an excellent way to explore your preferences, so you can find more things that you’ll love.

Click the link below for page 2 of the interview.