BlackSci-Fi.com caught up with the organizer of The Atlanta Science Fiction and Fantasy Expo (ASFFE), Tony Cade, and talked about the upcoming March 5-6 event. The expo will be held at the Atlanta area North Dekalb Mall. 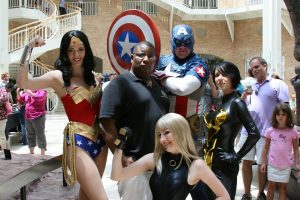 BlackSci-Fi.com: Give our readers an idea of how the Atlanta Science Fiction and Fantasy Expo (ASFFE) came to be?

Tony Cade: The expo grew from my experience of hosting a State of Black Science Fiction (SOBSF) Author’s Showcase in my store (Challenges Games and Comics) in 2014. I wanted to try taking that event to a different level which would celebrate the various genre talent in Atlanta and throughout the Southeast.

BSF: What do you hope visitors will take from the convention?

TC: I want everyone to remember all the fun, memories, new friends and knowledge they acquired at our show.

BSF: What would you say separates your expo from others?

TC: The expo is free to the public. And I hope it has something for almost everyone. 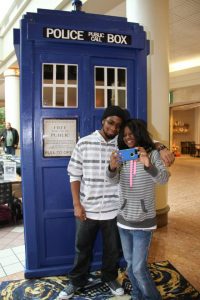 of (ASFFE), and the owner of Challenges Games and Comics?

TC: Exhausting. And I’m also co owner of Dantonio’s Pizza and Wings. But I’m working hard now on my own interests so that hopefully I can retire one day and feel I have left a positive mark on the world.

BSF: Can you give an idea of what panels/ guests will be available/ in attendance?

Scheduled panels include such topics as DIY Animation on a Budget; Independent Creators of Color and Their Creations; Co-Authoring: Collaboration and Self-Publishing; and Animating for American TV. Local comic book artists, authors, and other artisans will have their works for sale throughout the weekend. Peachy Maid Café will also be debuting their second dessert-themed event, Cookie Fantasy! 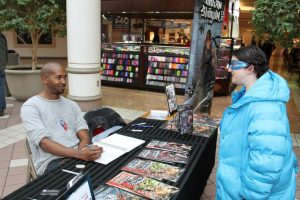 BSF: As a comic book/ sci-fi fan growing up did you ever think that you’d be organizing such a convention?

TC: I actually thought I would have a career in journalism. But I’ve been in love with comics and chess since I was 9 years old. So I’m just happy that I can make meager living from the things I love.

Head to http://www.atlantascifiexpo.com/ for more information about the expo.