I Am Black Sci Fi

These fierce Black actresses are opening doors in Sci-Fi Films & TV and we couldn’t be more inspired!

There has been a recent surge of Black actresses entering into the realm of Sci-fi and other speculative fiction, and we couldn’t be more excited seeing these perspectives being played out on the big screen and the TV screen, in fantastic worlds and situations. SyFy is one network that seems to have led the charge, casting Kellita Smith as the lead in one of their most well received, long running series in a minute. From zombie hunters to vampire slayers, here is a list of a few of our fave Black actresses who graced the SYFY network. 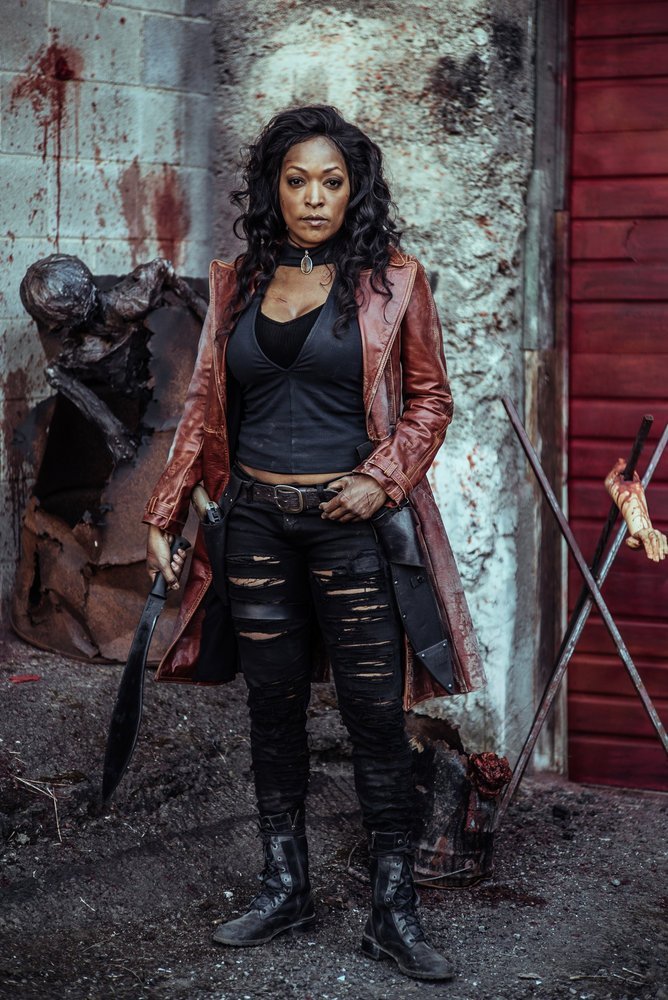 Move over AMC– Michonne isn’t the only bad ass woman slaying zombies.  Z-Nation, a SyFy original series, is set in post-apocalyptic America several years after a zombie virus swept across the country, leaving only one hope for an antidote—a man by the name of Murphy. In the series, Smith plays Roberta Warren, an ex-National Guard Lieutenant and the de-facto leader of the Westward-bound Survivor Group. Roberta has been a central character throughout the majority of the series. Unfortunately, the series aired it’s final episode in 2018, but we have hopes to see Smith in more Sci-fi in the near future! 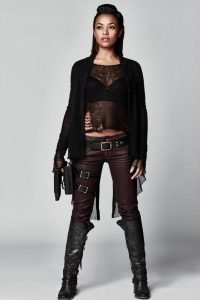 In Dark Matter “the crew of a derelict spaceship is awakened from stasis with no memories of who they are or how they got on board. Facing threats at every turn – and the realization that they were wanted criminals pre-amnesia – they have to work together to survive a voyage charged with vengeance, betrayal, and hidden secrets.

Melanie Liburd made her first appearance in season 2 of Dark Matter and plays the role of Nyx Harper, a powerful fighter who prefers to roll solo.  Nyx is also a “Seer”—the term for a race of people who possess psychic abilities. Nyx is very fond of weapons and has proven to be a valuable addition to the overall storyline. Dark Matter ended in 2017, but thanks to On Demand and streaming networks, we’re sure you can find it somewhere online. 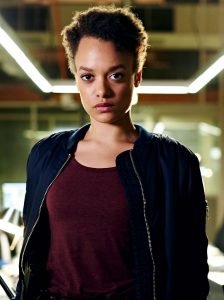 Hunters is a series that centered on Flynn Carol, an FBI agent investigating the disappearance of his wife Abby, “which leads him to a secret government unit assembled to hunt a group of ruthless terrorists called “Hunters” who are eventually revealed to be aliens.

In the series, Britne Oldford plays Allison Regan, the “most valuable operative of the Exo-Terrorism Unit (ETU).”  She’s tough and authoritative, and definitely an asset in combat.  She’s also good at tracking Hunters—is it because she’s a Hunter too? Like other SYFY network faves, Hunters is another one that ended too soon, but it’s definitely worth it to search for the series online. 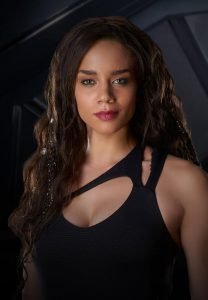 In Killjoys “a trio of bounty hunters, known as Killjoys, chase deadly warrants through the Quad, a distant area that is near the start of a violent class war among multiple planets.”  In the series, Kamen stars as Yalena “Dutch” Yardeen, “leader of the top bounty hunter teams” in the Quad.  A trained assassin and covert operative, Dutch is well versed in hand to hand combat, weapon skills,  and has advanced level intelligence and interrogation skills as well. Killjoys aired its last episode September 2019, but definitely catch up on the reruns. 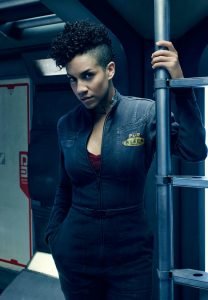 The Expanse takes place “hundreds of years in the future. Humans have colonized the solar system and the U.N. controls Earth. Mars is an independent military power and the planets rely on resources from the Asteroid Belt, where air and water are more precious than gold.  In the series Tipper plays Naomi Nagata, the Chief Engineer on board the ice hauler, Canterbury.”  “Naomi’s early life was lived on a knife’s edge: nearly suffocating, starving, and becoming marooned were regular occurrences throughout her childhood. She is cagey about her past, even with her closest friends. She abhors violence, but has witnessed enough injustice to understand the necessity of it. Her complicated relationship with violence and her troubled history have lead to an unlikely friendship with the Canterbury‘s mechanic, Amos Burton.” The Expanse was canceled by SyFy, but has now been picked up by Amazon.

A Sci-Fi & Horror mix, Van Helsing is set in the near future, where vampires have risen and taken control.  A woman named Vanessa Van Helsing (Kelly Overton) is humanity’s last hope, as her unique blood composition gives her the ability to turn vampires human. With this secret weapon, Vanessa becomes a prime target for the vampires.  In the series, Bernard plays “Doc”, a socially awkward, scientist who was turned during the early days of the vampire rising.

Eventually, due to Vanessa’s unique blood composition, Doc is turned human again, only to struggle with reclaiming her humanity. As the series progresses, Doc begins to become much more emboldened and even finds love. However, Doc wasn’t as present in Season 4 as she has been in previous seasons. Hopefully, we’ll see her again in the upcoming final season later this year. 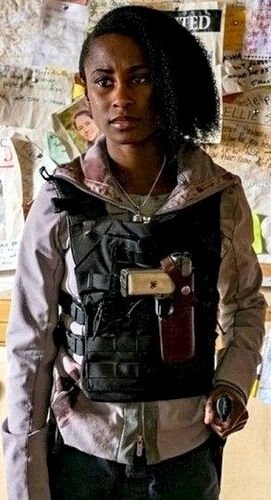 Season 4 of Van Helsing brought us some surprise new characters and one of the most stand-out of them all was the talented Keeya King, who debuted in the series as one of the main characters, Violet Hansen. She’s introduced into the series after Julius is assigned to train with her. After he witnesses her causing a vampire to revert back to human during an attack, and she is instantly healed, he theorizes that she is a Van Helsing. It turns out, Violet is the product of Hansen & Black Tech with another twist thrown in! But, without spoiling too much, definitely check out this fierce newcomer (who you may remember from Jigsaw (2017)) in the upcoming season airing later this year She has definitely been a welcome addition to the series

So what do you think? We don’t know about you, but SyFy is definitely setting the example for other networks to follow when it comes to bringing Black women to the genre. Visit www.syfy.com for more information about each of the shows mentioned.

Tiara Janté is a Writer who enjoys producing content centered on Blerd culture, Sci-Fi & Fantasy,  topics pertaining to millennial women of color, and hip hop. Tiara is a Staff Writer and Events & Publicity Coordinator at BlackSci-Fi.com. She is currently working on her first novel. Follow her on Instagram and Twitter: @themomprenoire.