One such example includes Gabrielle Aliké Hawkins‘ independent film, Criminals. Hawkins has studied the craft of filmmaking internationally in London, on our own shores in the great NYC, and has honed her craft working on such indie productions such as Alto and Global Tides.  The film has recently made the rounds at a host of film festivals, and was a winner at the NYC Indie Film Awards in 2017.

From the film’s summary: The year is 2040. In this dystopian society, Ian and Ariana are the last surviving members of an underground movement called the E.G.O. Igniting a massive manhunt after them, for infiltrating the notorious officer program and stealing confidential government files, they escape into the woods fighting to reach their last hope of survival. A place called Nuevo Acuerdo, a society untouchable by the government. Will they make it?

The filmmaker recently took  time to speak with  BlackSci-Fi.com about the film festival storming Criminals.

BlackSci-Fi.com: Can you start by telling us a little about yourself, your background in film, and just being a creator overall? 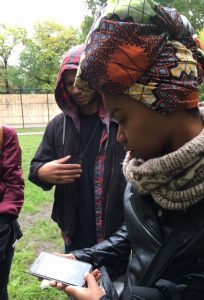 Gabrielle Alike Hawkins directing on the set of “Criminals”.

Gabrielle Hawkins: I’m a Brooklyn girl. Not today’s Brooklyn, I’m Brooklyn from the 90’s. I think that’s an important aspect of who I am because it has shaped who I am today and my creative work. I studied film at Brooklyn College and graduated with a B.A. in Film Production. I also participated in a 3 month program at the Met Film School in London where I studied Film Producing. I didn’t grow up knowing I wanted to be a filmmaker but I knew I wanted to tell stories through art whether it was through dance, writing or photography. After I took my first film class in college, I knew that I wanted to focus on film.

BSF: What drew you to filmmaking? What about the medium drives you to create movies?

GH: Media is probably the most influential tool out there. I love the artistry of film and the creation process. I’m influenced by music, films, dance, photography and life overall. Film allows me to combine all of these passions. Film can make you feel included or excluded. For example, in high school I remember I started to believe some of the stereotypes that I saw on screen. At some times I felt that was all I could amount to. Thank goodness for my parents and grandparents who showed me different positive African-American images and always taught me history that wasn’t taught in school.

TV shows like A Different World and Living Single showed positive images and were such important programs that allowed for dialogue. The episode about the word nigger in A Different World allowed for a discussion about the meaning of that hateful word with my mom. The 90’s showed great diversity with different cultures during this time and then it slowed down and eventually disappeared until recently. The first time I learned about the Middle Passage was from my parents. Middle school and high school barely talked about that time in history. I also remember my mom giving me her copy of Bury My Heart at Wounded Knee by Dee Brown. She said that I wouldn’t learn about this in school and she was right. That book should be required reading.

BSF: Is science fiction a particular favorite in terms of film genre’s to create in, or does this include a variety of other genre’s?

GH: I do love sci-fi and I would say it is one of my favorite genres, because if you think about it we are living in it now. I love that in this genre you can explore different concepts about consciousness, humanity, and technology. I was first introduced to sci-fi not through narrative films but through documentaries, astronomy and novels written by Octavie E. Butler. It was later in film school that I explored narrative sci-fi films such as 2001: A Space Odyssey and Blade Runner.

BSF: A common saying nowadays is that the field of independent filmmaking has become more level, with the advent of new technologies, greater access to information etc. Do you feel that this is the case? Why or why not?

GH: I think there are two ways to answer this question. I think in terms of making an independent film, you do have greater access thanks to digital filmmaking. There are also so many ways for people to watch films now. You can upload to websites, like Youtube or Vimeo and people can view your work. Also there are so many festivals, that accept many different genres and stories. The down side of festivals sometimes is that most entries require a fee and many festivals don’t offer feedback as to why your film was not accepted.  Some do which I find extremely helpful but many don’t. If you want to have your film in theaters, I think that is still pretty tough for indie filmmakers. Not that it’s not possible, because it definitely is, but it’s harder for an indie film to get wide release in theaters than a Hollywood film. 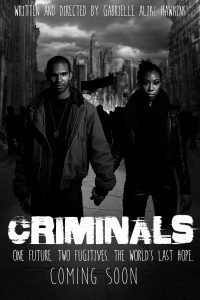 BSF: How has reception been to the film from audiences?

BSF: What’s it like now taking the film to different festivals and having it viewed for possible awards?

GH: It’s time consuming and sometimes draining because I have been submitting to festivals on my own. I had to give myself a limit to how many festivals I would submit to. I am still waiting to hear back from more. It’s important to research the festivals and see if your film is the right fit for them especially since you have to pay to enter. I’m still figuring out who the audience is for this film since I blended the sci-fi and film noir genres. I received some great feedback from the festivals I have entered which has been super rewarding.

BSF: Who are your go to directors when it comes to looking for examples of those that have paved the way in sci-fi filmmaking, or filmmaking in general?

GH: Melina Matsoukas’ work is so incredible from her music videos to her work on Insecure. Her visual aesthetic is stunning and the doors she has open from women and women of color is phenomenal. She has a clear voice and when you see her work you know it’s her.

From her Youtube series The Misadventures of An Awkward Black Girl to her current show Insecure, Issa Rae is an example of creating on her own terms and her work always comes from a place of truth.

Tom Tykwer’s film  Run Lola Run, is one of my favorites. The story is just so different and the moment I saw it I was in love with it.

Smoke Signals by Chris Eyre is a film that has always stuck with me. It’s an indie masterpiece in my opinion that deserves more recognition. 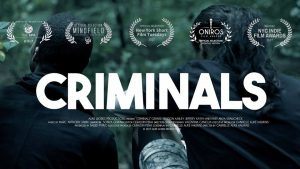 BSF: We’re talking on the heels of Oprah Winfrey winning the Cecil B. DeMille award at the Golden Globe awards. There’s Kiri Hart leading the Lucasfilm story group, and then we have Ava DuVernay who is directing A Wrinkle in Time which is scheduled to be released in 2018.

These are three solid examples of filmmakers and power brokers who are making waves in the field of Hollywood filmmaking, and in sci-fi storytelling. I’m sure there are a lot of people that I’m missing. Unfortunately, representation of women of color being the power brokers behind telling sci-fi stories is still sorely lacking.

My question is what will need to be done to further open these doors for future filmmakers like yourself who want to tell such stories for wider audiences?

GH: In order to create change you have to understand the things that will not change. There are certain institutions that will not want my work or understand my work. I started my own film production company called Aliké Words Productions. I’ve been balancing producing work through this production company, collaborating with artists, and maintaining a day job. I realized early on that I would have to open my own doors as a writer, director and producer.

I have been following Ava DuVernay for a long time when she started AFFRM (African-American Film Festival Releasing Movement) currently ARRAY. This distribution company I found to be so needed and was thrilled to see such incredible films come from her company. Her TV shows, her films and her talent is so needed and I am just so happy that she is in this industry. Oprah Winfrey winning the Cecil B. DeMille is long overdue and much deserved. It’s about time. Kiri Hart leading the Lucasfilm story group is incredibly important for women and people of color being included in the sci-fi universe. We have a long way to go and we are getting there thanks to these women and many other people that strive for diverse storytelling. 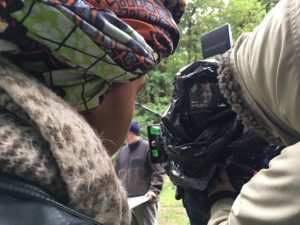 Gabrielle Alike Hawkins directing on the set of “Criminals”.

BSF: What can our readers look forward to from you in the future?

GH: I want to develop Criminals into a tv series so I am working on writing episodes for that now and hope to pitch to networks and streaming companies. I am also working on a short music documentary and writing a feature film. My goal is to write for every genre ranging from sci-fi to romantic comedies. I love a challenge.

Criminals will have it’s LA premiere as a part of the Indie Night Film Festival on Saturday,  March 24th at the world famous TCL Chinese Theatre. Tickets can be purchased using this link:
http://www.indienightfilmfestival.com/event/6-11/