Without her inspiration, I would not be pursuing my career of writing. It is a sincere pleasure to present my interview with the great Duchess of Diversity, Tanya DePass.

BlackSci-Fi.com: Please describe for our audience who you are and what you do in your own words.

Tanya DePass: My name is Tanya DePass and I run the non profit I Need Diverse Games which is a 501c3 based out of Illinois and what we do is to work towards better diversity inclusion in the industry. That includes tabletop, [and] videogames. It started because I was mad on the internet about video games about 4 years ago and it happened…right place, right time, [and the] conversation kept going and out of that came community. I started doing more panels, more conventions, more conferences, [and] decided that we really should have a more formal organization.

BSF: On your podcast, Fresh Out of Tokens (RIP), you used to ask your guests a question which I will now ask you, what is your gaming origin story?

TD: I grew up with D&D. [I] got into D&D, arcade games, fighting games…I grew up with Street Fighter II in the arcade and then just branched out from there. And since gaming is part [of] what I do, I’ve got to keep up a lot more. Partially, because of the podcast I’m on now, Spawn on Me, but also just because if your going to be informed about things and if your going to be a diversity advocate you have to stay up with what is going on. But I’m an old school paper and dice player and that’s how I got started. 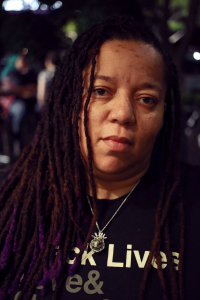 BSF: Now you are a member of the podcast Spawn On Me. What is it like working with that crew permanently and how does it differ from when you were a guest and/or ran your own podcast?

BSF: What are some of the common challenges that you go through when talking about diversity and inclusion within your consultation work?

TD: Even getting people to have the [diversity] 101 conversation…sometimes you’ve got to drag them by the hand…and sometimes when you try to go beyond the 101 level, that’s where you face the difficulty. In the public sphere when you mention race, gender, orientation, or mental health, there is always the very small, [but] loud group that is just “oh my god, SJW’s” and “you’re evil”. We just want a piece of the pie. [They] just think we are going to take all of [their] games. Most of the roadblocks [are] the public discourse in getting past the 101 level. Yes, this is 101 and you still need it. These people are like, “I can’t find brown people!” and I’m like, “Have you gone outside?”. [They need to] accept that we are part of the culture and part of the industry and stop acting like we’re so rare. The IGDA, International Game Developers Association, put out their 2017 data. The industry is so overwhelmingly a white male industry.

We still have an overwhelmingly white workforce [who are] making our games, and so that’s [still a] challenge. And sometimes it’s just simple ignorance. We become accustomed to the default of the cis-white male and so I’ve had conversations where someone literally had that lightbulb [where they said] “I never really thought of that”. They don’t think about what is like for me, as a black player, as a female player, as a queer player to hear the line or see this dialouge or see this character because they literally don’t have to think about that. And I feel like the discourse goes from zero to “you are the worst racist that ever existed” and there is no in between. You need a basic dictionary for people to let them know what racism actually means and then go from there. [The] default setting is so ingrained in people [if there is] difference they freak out. 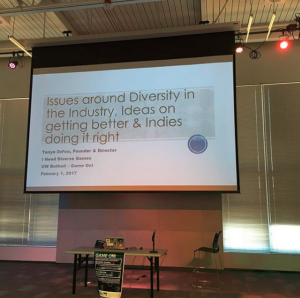 A picture from a I Need Diversity Games panel.

TD: I would like for them to uphold the new TOS (Terms of Service).I wish we could get demographic data because right now you can’t find demographic data of who is streaming. I wish there would be better data for us to use because [we] could [look] and say here’s the x number of people that stream on your platform. Here [are] the affiliates [and] the partners. Lets break this down by gender [and] by race and question why the majority of partners are white dudes. There is no data to prove [this], but there [are] not a lot of people of color I can name that are partnered. Spotlight more of those people and not just in February. I wish there was more recognition of people other than [cis-white males]. At the end of the day, we are still providing more content and value than we are getting out of it. If you don’t have enough subs to get 100 bucks take home, you end up providing free content at the end of the day.

BSF: It has been hard for me to get into Twitch due to the chat being so toxic. I tried watching Overwatch league….

TD: UGR Gaming talked about that…how bad the chat is during events. And the chat is just so bad, I will just host it on my channel. They need to address it and yes, they finally did something with the Overwatch league with persons spamming “Try Hard” (a black person’s face used as a meme), but [they did something] because Blizzard spends a lot of money on Overwatch league. They don’t want to have that bad rap. Twitch was bought by Amazon, and Amazon should be going hey, this is our platform, our name is on it, we should be doing better.  Because the TOS is great but are they enforcing it?

BSF: You have talked about a lot of the challenges you’ve faced, but what are some of the “wins” you have had with your influence with I Need Diverse Games?

TD: There is industry recognition and people who realize the value of what we do. I’m very lucky to basically make my living off [of] folks believing [in] the work I’m doing and being an industry voice for people. It’s very humbling and gratifying to have that recognition, but its also frightening because once you’ve achieved a certain level of visibility you become hyper-visible [and] everything you say and do is scrutinized at a higher level. For every person that comes to me at a panel or at a con and says “I don’t feel afraid now”.The problem is representation. The success…it’s not monetary. Knowing that I influenced or touched someone, that is worth a lot.

DePass and other I Need Diverse Games members

BSF: If it wasn’t for you, I wouldn’t be writing write now. I hope you understand that you are not out here by yourself. There are people out here that look up to you and see what you are doing and are inspired. I’m raising a daughter who games. She is a STEM kid who is a gamer girl. I’m excited and terrified of the current state of “geekdom”. Where do you see the future for people like my daughter? How positive is your outlook for change?

BSF: What’s next on your radar?