A footnote or byword in the telling and retelling of the world’s first superhero’s origin, the ill-fated planet Krypton is the setting for Syfy’s latest sci-fi drama, taking place two generations before the birth of its last son. Utilizing the tried and true sci-fi element of time-travel, Krypton is an exploration of an as-of-yet fully explored people and culture, who had lives, loves, ambitions, lore and more before their ultimate, and globally catastrophic end. But is this new epic serialized “Pompeii in space” as doomed as its namesake?

In regards to presentation, the show’s writers and producers go to great lengths to make Krypton a living, breathing and foreign world. Developed in part by David S Goyer, who is no stranger to the mythology, having been the screenwriter of both Man of Steel (2013) and Batman v Superman: Dawn of Justice (2016), the overall aesthetics of the extraterrestrial landscape borrows heavily from the DCEU interpretation. The other worldliness and intricately detailed veneer is seen through the range of consistently authentic feeling clothes, décor, items and devices used by its denizens. And even though the bulk of the show does not extend beyond the borders of the famous city of Kandor, there is notable diversity and identity with every locale, from the snowy tundra outskirts, pristine citadel, genesis chamber and vagrant slums. 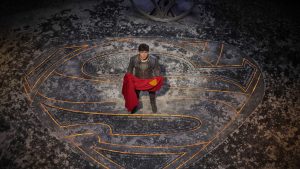 It is clear from the onset that there exists social inequality akin to the caste system on Krypton, dispelling its often idealistic, nigh-utopian portrayals in the past. This helps justify the existence of a military class – called the Sagitari – in a unified population, to keep the peace in the interests of those in power. Krypton is further fleshed out through its complex religious hierarchy and its monotheistic theocracy, which had evolved from its previous polytheistic faith. All these aspects are shown or implied through normal dialog and natural exposition. But while the use of English (and the lack of genuine Kryptonese) can be given a free pass, emersion is lost when characters use Earthly idioms and gestures, which is very distracting. Nevertheless, all of this is merely the backdrop for the show rather than its primary focus.

While the series purported protagonist is Seg-El (portrayed by Cameron Cuffe), the last El on Krypton and the grandfather to Superman, further analysis reveals the series, at least the first season, has Lyta-Zod (portrayed by Black Briton actress Georgina Campbell) as the nexus from which all other relationships connect. In essence, Krypton covertly depicts a strong Nubian woman as its lead, and therefore should be viewed from her perspective. 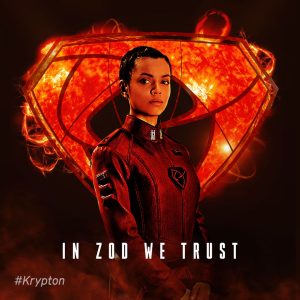 Lyta-Zod is the destined mother to one of Superman’s greatest and most iconic arch-nemesis, the megalomaniacal ubermensch General Zod. Subverting preconceptions, more so than the Zod family being Nubian, the show introduces a wrinkle in the lore with Lyta having a longstanding tryst with Seg. As the show progresses, we see their emotions and relationship ebb and flow, and even though the outcome is literally preordained, this sci-fi Romeo and Juliet couple are oblivious – at least in part – to their ultimate fate. Complicating matters is her betrothed and fellow Black soldier Dev-Em (Aaron Pierre) who has genuine feelings for Lyta. Even more so, is that Seg’s affections are also being vied for by Nyssa-Vex (Wallis Day), the conniving and manipulative Arian aristocrat who is Seg’s betrothed. While Nyssa’s motives are always suspicious, her heart is often in the right place, and her genuine affection for Seg makes her a formidable foil for Lyta. Meanwhile, grooming Lyta is her austere mother Jayna-Zod (played by Ann Ogbomo), who herself struggles with her maternal instincts and her loyalty and servitude to her house’s militaristic ideals. Lyta is therefore torn amongst these interrelated relationship issues and her feelings, effectively evolving into an emotionally intriguing, albeit unresolved, character arc by season’s end.

The “main” story however follows the brass and immature Seg-El, whose motivations early on are myopic in scope. Having his house stripped of its honor, and family publically executed (twice), his bitter resentment towards the upper-class only goes so far as distain. Its only through the arrival of time and space faring Earthling Adam Strange (Shaun Sipos) that Seg’s life gains purpose and meaning, albeit if only for his prophetic progeny. Seg is also accompanied by long-time friend, bartender and engineer Kem (Rasmus Hardiker), whose only character trait is his pragmatic response to matters as some semblance of tension relief. As a nascent actor, Cuffe’s performance is the weakest out of the main cast, bordering between serviceable and underwhelming for Krypton’s billed protagonist. Shaun’s rendition of Adam Strange’s characterization shares a lot with fellow time-hopper and washed-up would-be hero hoping to make right Booster Gold. Overall, Seg and his uncoordinated bro-posse have the least entertaining group, making sense when his inner cycle falls apart while Lyta’s grows stronger, if reluctantly. 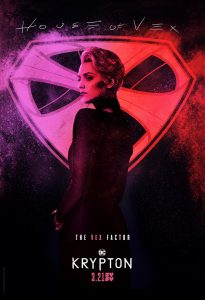 The series has a healthy dose of mainstay antagonists, which alienates Krypton from your typical “superhero” format done ad nauseam, as no one is really a (one-note) “supervillain”. There is the unscrupulous father of Nyssa, Daron-Vex (Ellioy Cowan) and his political manipulations; and the red-herring terrorist cult of Black Zero led by (the now female) Jax-Ur (Hannah Waddingham). Dru-Zod’s (Colin Salmon) surprising mid-season appearance calls into question what we have come to believe of the relationship between the house of El and Zod. His time-displaced presence only complicates matters for his mother Lyta as well. Colin’s performance as the iconic Zod is reserved, while preserving the zealously nationalistic and fascist ideologies that has defined the character since his conception in Action Comics #283 (1961). If anything, Colin is a worthy successor to the role, overshadowing Michael Shannon’s manic portrayal in “Man of Steel”, while not treading on the nostalgic purity of Terrence Stamp’s quintessential interpretation in Superman: The Movie (1978) and Superman II (1980). And last, but not least, the big bad Brainiac (Blake Ritson), whose premature arrival to Krypton is what necessitates Strange’s time travel and quest to save Seg and help stave Krypton’s demise by two generations. While Brainiac only really makes an appearance in the final few episodes, Blake’s visual appearance and character-appropriate gravitas only begs for a big screen debut of the infamous calculating Coluan.

Season one kind of muddles towards its inevitable climax, which pulls the rug from under us at the literal last minute. The closing moments of the finale naturally transition into season two leaves me wondering how things will get back on track according to canon. Like with past superhero prequel shows Smallville (2001-2011) and Gotham (2014 – present), Krypton will endeavor to milk as much excitement, entertainment and intrigue down to the wire. Its long-term success will then be determined by how well it plays around with established concepts and defined destinies, and balance that with unique/interpretive storytelling that is respectful and at the same time fresh and innovative. Moving into season two and beyond thought, there have been rumors of Thanagarians appearing on the show. I’m looking forward to seeing other non-Kryptonian characters/races, possibly a Green Lantern, the New Gods, Tamaraneans or even Daxamites; but more likely Legion of Super-Heroes will appear in the future…pun intended. 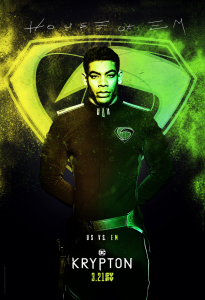 Compared to its sci-fi contemporaries, superficially, Krypton really does nothing new or spectacular with its premise, outside of providing a more “alien” experience with a dearth of the familiar, to its credit. Sci-fi enthusiasts will be pleased with its layers of detail and quality thereof. Superman fans may be put off by the liberties the show takes with key elements, but they should give this show the benefit of the doubt. Also, on the one hand, the inclusion of a robust cast of Nubian characters is a positive for the show, especially with leads Georgina and (later) Colin; but the level of diversity ends there. There is no representation of other ethnicities, or at least prominently, or those of alternative lifestyles, which may put off some viewers who can find that in other superhero shows. Your enjoyment of Krypton therefore will depend on what you’re looking for; but if you come for the El, stay for the Zod.