Editor’s note: This essay/ review was originally published on http://www.onyxcon.com/blog  and was reprinted on BlackSci-Fi.com with permission from the original author.

It Was the Best of TIMES: It Was the Worst of Times

It reflects the triumphs and challenges brought to the table in Marvel Studios’ BLACK PANTHER (In theaters February 16th). This is a fictional super hero, spiritual avatar, and king of a sovereign African nation first appeared in the works of comic book creative team writer Stan Lee and the late great illustrator Jack Kirby. Panther appeared first in 1966 in Fantastic Four Vol 1 #52. Both King Kirby and Stan ‘The MAN’ Lee as comic book fans affectionately call them are both of Ashkenazi Jewish descent. BLACK PANTHER in its original comic book form has had many writers and visual art teams since Lee and Kirby. Amongst the most notable contributors include writer Christopher Priest (African American) who’s 90s run on the character is cherished and recently the rebirth of Panther via writer Ta-Nehisi Coates and illustrator Brian Stelfreeze.

As a writer and a visual artist, myself, it is my perspective that when one writes or draws from the model of another people’s history and culture, portraying their interpretation of phenotypes, social customs, etc. as a muse – the actual people should forever have the right to claim it as a proud part of their legacy IF they approve of what is born from the ideas manifested. BLACK PANTHER has been approved by most fans of direct African descent and claimed in comics and now in the ultimate massive impact medium of film.

I officially embraced my dream and claimed the title of an Actor in 2014. I have since worked on hundreds of television shows and movies. Most notable in the realm of sci-fi/fantasy etc. are Captain America: Civil War, Spiderman: Homecoming, and BLACK PANTHER! I did a day of double and background work on this gem. 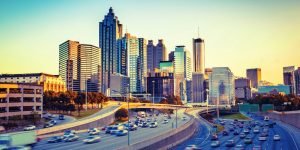 Georgia is now #1 for the amount of films made in my state. And my city of Atlanta is the epicenter of its growth. Being able to be part of this has given me certain connections and insider love for this industry. (*Shoutout to Konrad) And so it was with great excitement that I was offered an opportunity to go on February 7, 2018 to Marvel Studios BLACK PANTHER Atlanta Premiere at The Fabulous FOX Theatre. This was personally touching on many levels because I was not only amongst an every seat filled crowd of fellow background actors, crew, media, and local government officials, but I was in WAKANDA!

#ATLANTAisWAKANDA! We made this film possible along with all the top star talent from all over the world. In many ways, we in Atlanta are a unit, a community, and force of creation. And to highlight what I saw on the screen, could it get any better than to have an opening address by all of Georgia’s Film industry heads and a last opening address by SAMUEL L JACKSON! The standing ovation was long and strong for the hardest working man in Hollywood! He even referenced that he will reprise his famous Nick Fury role in film Captain Marvel (currently in production). At the end of the film the civil rights movement ambassador and Congressman JOHN LEWIS took the stage and expressed his personal and political gratitude for the film’s human rights messages.