Marvel’s Cloak & Dagger is a maverick amongst its contemporaries. Rather than focus or relish on the surreal aspects and nuances of a superhero property, whether through a gritty and dark filter or through the vein of campy and upbeat – both bathed in elevated self-indulgence – it has the courage to address very unpleasant topics that are both neglected and relatable for many. But this uncharted nuance comes at a heavy price, as it sacrifices virtually everything one would come to expect of a superhero series on the silver screen, invariably alienating those who might be interested in this obscure Marvel IP.

Created by Joe Pokaski for the Freeform network, the series is produced by ABC Signature Studios, along with Marvel Television and Wandering Productions. Like all other Marvel properties, it loosely takes place in the same shared macro-verse as the other cinematic films and the Netflix series, but in its own niche quadrant unrelated and unaffected by those stories and events. All of this is set in the ample backdrop of New Orleans, with its poignant contemporary racial issues and uncomfortable heritage.

Throughout the premiere season, we follow two empirically dichotomous characters, the titular Cloak/Tyrone Johnson (portrayed by Aubrey Joseph) and Dagger/Tandy Bowen (played by Olivia Holt), whose lives are overturned one fateful night when an off-shore oil rig mysteriously erupts. This event endows our young leads with their unique powers, but the series doesn’t officially kick off until an eight-year time jump. 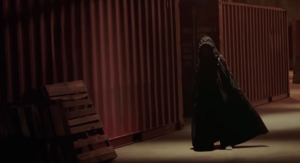 Major themes of Cloak & Dagger revolve around tragedy, and how people cope, evolve and adapt to deal with not only the tragedy itself but its ramifications in the years to follow. The sense of powerlessness, racial stereotyping and survivor’s guilt also play significant roles in our main protagonists.

Tyrone, an up-and-coming young adult in school with a promising career in basketball, is bullied by his predominantly White peers just for being Black. Whether he retaliates or submits to their abuse, both verbal and physical, he never winds up on the winning end of any confrontation. A grim reflection of how some African-American youths feel when they come from a well-to-do household and middle-class economic background, but live in a predominantly White and divided community. This anguish is compounded by the fatal shooting of his older brother eight years prior by a dirty cop who was never brought to justice; galvanizing his parent to fearfully raise him as an immaculate prodigy in the hopes it will safeguard him from a similar fate. This leaves Tyrone emotionally callous and sheltered. With justifiable indignation for his lot in life, this pushes Tyrone on a path of (at first vengeful) retribution.

Meanwhile, once-well-off daddy’s girl Tandy must suffer through the death of her father, whose reputation and career grossly tarnished, leaving Tandy and her mother in abject poverty. Tandy’s story is more about righting the wrongs done to her father rather than retaining the social and financial status her family once enjoyed. Unfortunately, the unscrupulous company responsible for it all has the court in their pocket. Tandy makes due as a high-end grifter, relying on her charm to victimize the wealthy of society. In addition, Tandy has turned to drugs to numb the reality of her predicament, while her mother turns to alcoholism and the occasional fling with unfaithful men. Tandy is eventually motivated to pick up the torch again to vindicate her father by any means necessary. 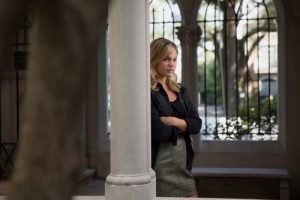 Tyrone’s and Tandy’s arc never truly intersect, remaining mutually exclusive all the way to the end. But while Tyrone’s is more personal and focused, Tandy’s quest to bring down the evil Roxxon Corporation is a bit nebulous in scope and direction.

When Aubrey and Olivia share screen time, which is quite few, far between and brief until near the end, their relationship wanes back and forth between mutual understanding and contempt. They comment and criticize each other’s perceptions and shortcomings, while at the same time, lifting each other up; finally settling on a shared respect and codependence to make it through together. This destructive/constructive critique is no different to people in recovery groups who through a common denominator are pillars of support, guidance, and understanding, who accept all the bad and the good of themselves and each other.

The series woefully underutilizes its cast of tertiary characters, like Tyrone’s mother and father (played by Gloria Reuben and Miles Mussenden respectively), the pastor/counselor (Jaime Zevallos) and the poorly characterized love interest (Noelle Renee Bercy). On Tandy’s side, we have her mother (Andrea Roth), mom’s current fling (Gary Weeks) and Tandy’s love-struck boyfriend (Carl Lundstedt). We later meet plot-progressive inserts Mina (Ally Maki) & Ivan (Tim Kang) Hess. For a vast part of the season, their appearances are minimal, in the interest of giving some sage advice or insight, only to be relegated to the ether until summoned again for the plot. All in all, their contribution was serviceable at best, and forgettable at worst.

The only exception is cliché Detective Brigid O’Reilly (Emma Lahana), hoping to clean up the corrupt police department led by its head honcho, her partner Connors (J D Evermore). She is the only supporting cast member to have any semblance of an arc and an auxiliary story thread.

The fact that I have spent so much time elsewhere and not spoken about the superpowers or the “comic book” aspect of the series is no mistake. In fact, the series only uses the signature abilities of our heroes as convenient plot devices. These McGuffins only manifest to get out of a situation or progress the plot where there is no other way of escape or moving the story forward. To the show’s credit, it does add a wrinkle to the mythos besides teleportation, umbra-kinesis, and nifty light shards, by giving Tandy and Tyrone a hope and fear touch. This adds an interesting layer to the story as we see the hopes and fears of other people, which in turn impact the heroes themselves through this revolutionary insight. 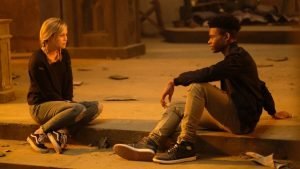 Overall, Marvel’s Cloak & Dagger is about two insular characters and stories that circumvent all expectations of a superhero TV show. It has a powerful message express, but its many glaring faux pas drowns out interest and engagement. These include its underdeveloped supporting cast, downplayed and reactive use of the superpowers, and its borderline lethargic pacing with overt dichotomous symbolism teetering on overbearing. The fact the first season is only ten episode is astonishing in terms of how needlessly elongated the series feels. And I haven’t seen a show so utterly dependent on color-coordination since Power Rangers.

Anyone looking to see another entry in the superhero genre can look elsewhere as that is amply satisfied with other shows by Marvel/Netflix and DC/CW. For everyone else who has come to fall in love with the more touching relevant take of two opposite, yet alike, teenagers dealing with these issues can look forward to another season; hopefully one more streamlined and better formatted in terms of its overall execution.