Happy June everyone! And welcome back to another edition of Nu-Perspective, the only redesign column for us, by us. We feature revamps and updates of various underdeveloped, underutilized and all-but-forgotten Nubian (black) characters specifically, and showcase them in fresh, contemporary and exciting ways both visually and story-wise.

For this month, we’re celebrating one character who is finally getting the screen treatment, and later on in the month another who we think similarly deserves the on-screen love. First up- CLOAK!! Regarded by some as nothing more than a C-Lister, Cloak will finally (and hopefully) get the respect he deserves when the series Cloak and Dagger debuts on screens Thursdays, 8 pm EST/PST, on the Freeform channel, starting June 7th.

Google his original look and story, and let us know if you like what we did with him. Then see ya in 2 weeks with another Nu-Perspective. 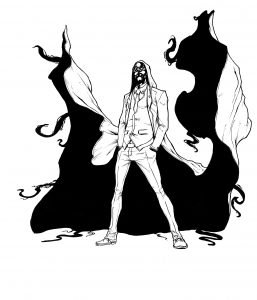 Base of Operations: Worldwide

Story: Growing up, Tyrone tried his best to avoid a life crime, drugs and the pull of the streets. Unfortunately, he was forced into this world when he was kidnapped by criminal chemist Simon Marshall and used as a guinea pig for an experimental form of heroin. Ironically, it would be this drug that would unlock Tyrone’s latent mutant powers that literally cloaked him in a shroud of darkness. (It was later revealed there was a more demonic hand at work behind the scenes concerning his powers.) Inexorably tethered to fellow runaway, latent mutant and kidnap victim Tandy Bowen, this inseparable duo fought the war on drugs in the streets as the dichotomous merciless vigilantes Cloak and Dagger. For years, Cloak and Dagger worked predominantly alone, only reluctantly joining other heroes or teams in dire situations. After their most recent ordeal, concerning a crime-lord by the name of Mr. Negative, Tyrone and Bowen are approached by Nick Fury Jr to lead an all-new Secret Warriors, an international black ops weapon against evil organizations, corporations and if necessary, SHIELD and the Avengers themselves. Having already been a member various “street level” teams with limited resources, Cloak realizes that he and Dagger can no longer contain themselves to just the smaller picture, and accept Fury’s offer.

Powers: Tyrone’s powers are derived from the extra-dimensional realm known as Darkforce, (an opposite to Bowen’s luminous Lightforce) His physical body acts as a conduit or portal to this inexhaustible abyss, which is facilitated by his cloak (but can be any material) which acts as a barrier or membrane between the physical plane and the Darkforce. Tyrone can thus: absorb virtually limitless matter into the Darkforce; summon items or people trapped inside at will; expel a field of pitch darkness from his being, the limits of which have not been defined; teleport himself and others; become intangible and phase through solid objects. Now, with more control over his abilities than ever before, Cloak can now utilize the energy he absorbs to make himself stronger and resist injury. He is also now able to make tangle tendrils out of the darkness he controls giving him defensive and offensive capabilities. His only glaring weakness is his insatiable hunger to consume life-light energy. Dagger is one of the only possible sources of this energy and she regularly “feeds” him with her light bolts. Other sources of light don’t work; for instance Dazzler tried to feed him once, using many kinds of light, but it didn’t help him.