Okay before I jump into this review, let me share a quick anecdote: during Thanksgiving of last year I went to visit my mom and stepfather in Florida.  As it seems is my usual thing to do now when I visit family, I started talking comic books, and movies, and told her about a new movie that was going to be released next year called Black Panther.

So I queued up the trailer on my phone, hyped to have my mom experience the movie in any form or fashion. A confused look graced her face, and I asked her what’s wrong. She responded, “Where’s Huey Newton?”

Fast forward to now and I’m seeing my mom liking posts on FB about the Black Panther film that was released this past weekend. Add to that, my declaration on a recent phone call that she and her husband NEED to see Black Panther, and I think she’s going to check it out soon.

Black Panther picks up weeks after the events of Captain America: Civil War. We see T’Challa (Chadwick Boseman) dealing with the loss of his father, his new position as King of Wakanda, and a new outside threat to his newfound position of power.

This review is probably going to be a little meandering as I try to get all of my thoughts out in as complete a manner possible. That’s probably not going to be possible as my mind still is racing with what I saw yesterday at a PACKED 10 am screening.

I loved this movie. When I say love I mean I’m probably going to see this movie multiple times in theaters, tell all my friends and family about it, and wait with baited breath until the film comes out on Blu-Ray so I can watch it multiple times after that.

From seeing powerful women like Nakia, Okoye, Shuri, Ayo, Ramonda handling things, to seeing an African nation being represented in all its glory, I was awash in a celebration of African/black culture. In a Disney movie. A film where I sympathized sooooo much with the “villain”, as he simply wanted to even the playing field for his disenfranchised black brothers and sisters in the most revolutionary way possible.

Let me say that again: IN A DISNEY MOVIE.

Growing up as a black comic book, sci-fi, fantasy, horror fan, seeing myself represented in larger pop culture was always a hit or miss affair. You definitely have solid examples such as Blade, Lt. Uhura, Ben from Night of The Living Dead, Selena from 28 Days Later, and so on.

And yeah, I know folks are going to throw Meteor Man and Blankman at me.

But here you get a film that pretty much says to all of those stereotypical looks of the African continent, and this stupid notion that big budgeted movies featuring characters of color won’t sale, GTFOH. Here you have a resource rich nation which is the MCU’s technological and economic powerhouse. A film where a warrior guard of black women kicked butt just as hard as the Amazons. A film that opens in Oakland CA, around the time of the Rodney King riots. A film where the most intelligent and technologically superior person in the room is a young black woman bursting at the seams with a desire to just get her great ideas out there.

A world where superheroics weren’t treated like a joke in the above mentioned films. My underlying problem with movies like Meteor Man and Blankman was this:  they were comedies. And not to say that Black Panther doesn’t have its comedic moments. The “Colonizer” and “What are those!??” moments had me rolling.

No, what each of those movies (and to be fair, a lot of superhero films from around that time) did with the concept of superheroics was treat it like a joke.  Here, in a film steeped in African culture, politics, social commentary, and cinematic world building you have a chance to see T’Challa (Chadwick Boseman) just be a damn hero on the hugest stage POSSIBLE. 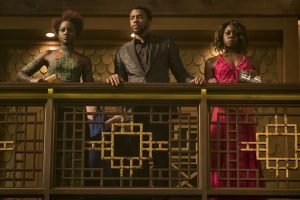 Often, on television and film, our heroes are often relegated to “saving the block”. Helping the crime ridden corner/ neighborhood. Saving the city.

I loved the fact that this movie was an international tour’de force. From its opening in Oakland, CA, to seeing Nakia, Okoye and T’Challa kicking butt in South Korea, to Killmonger leading his final charge into Wakanda ,audiences realize that black characters can globe trot with the best of them.

I personally would love a story focused on Nakia, Okoye, and Shuri travelling the world and kicking butt on behalf of Wakandan interests. How about a new comic book series in addition to a spin off Netflix series?

Stop confining us to the block, Hollywood. We can also save the world. ?

John Robert Cole and Ryan Coogler should be applauded for composing a script that balanced a healthy bit of well nuanced social commentary in with a major budget superhero film. Director Coogler, and Uber producer Nate Moore need to be applauded for just bringing this all together. All of the actors of the movie need to be given their just dues with bringing to life these characters that we all have come to know and love in the comics (with a special shout out needed for Letitia Wright, Michael B. Jordan, Winston Duke as Shuri, Killmonger and M’Baku respectively). The set design and costumes deserve Oscar nods for the single fact that this film fleshed out a portion of the Marvel Cinematic Universe better than any other film in its roster to date.

Everything, at least for me, just worked extremely well. 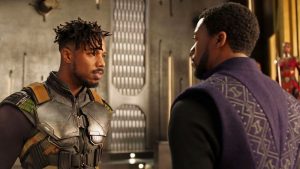 “I’d rather die in the ocean like my ancestors, than to live in bondage.” -Erik Killmonger

Michael B. Jordan’s Killmonger has now officially given Tom Hiddleston’s Loki a run for his money as being the best antagonist that the Marvel Cinematic Universe has ever produced in its 10 year history. I found myself on the verge of tears in a couple of spots in the movie, and believing in this man’s cause. Dude isn’t a villain AT ALL. I’m sorry, that may piss off some people, but when you dig deeper into this characters motivations, you realize that he’s honestly just trying to level the playing field.

Albeit in the most bloody and violent way possible, and that may be where he loses a lot of people. But I’ll be damned if I’ll sit here and say that a small part of me didn’t want those ships to make it over the border. The writer in me was saying “Damn, I’d love to tell THAT story.”

You feel Erik’s pain as he discovers his fathers lifeless body on the ground. You feel his anger when he lays his claim to the Wakandan throne. You empathisize with him throughout this film.

That’s the mark of a great antongonist. Using the years of character building in Marvel Comics, Coogler and Cole have created a solid cinematic foil for T’Challa. 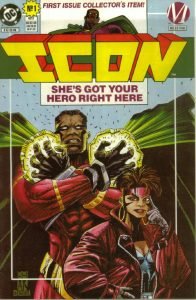 I’m sitting at my desk in front of a poster which features the superhero duo of Icon and Rocket. Two characters created by Milestone Media, this crime fighting duo for me as a child way back when (and even now), were something that I sorely needed while reading comic books. Here you had superheroes who looked like me being featured prominently in the pages of a comic book. Add to that the creative crew creating these characters also looked like me. Black.

That’s what kids of today will see when they see Black Panther. And adults. In a world where our blackness is constantly under assault by the powers that be, to have an example where this blackness is celebrated? Sign me up for multiple viewings.