What’s up peeps!! September is here and the Nu-Perspective is at it again. A little late, but we’ll be making up for it by giving you a whole boatload of extra characters. And this month’s theme is a dedication to one of my all-time favorite groups- THE NEW WARRIORS!!! As I said before, the potential for this collection of heroes is infinite.  Hopefully Marvel realizes what they have and give them the respect they deserve in a new title.

We’re starting the ball rolling with Debrii. Not much is known about this character, but that’s why she would be so exciting to work on. Be sure to Google her original look and story, and let us know if you like what we did with her. Then see ya sooner than ya think with another Nu-Perspective. 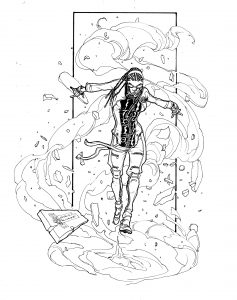 Story: Handpicked for the New Warriors reality-TV show to be the snarky, abrasive personality, young Debrii’s life became one of infamy following the tragic Stamford incident that demonized Deborah and her team. Her subsequent journey was filled with many highs and lows, with more lows than highs, eventually even leading to her living in Paris working as the snarky judge of a TV talent competition show. However, the call of a hero never left her, and she returned to the States helping her superhuman community where she could. When the original Night Thrasher, along with Aegis and Rage – all presumed dead – approached her to help rebrand and reform the New Warriors, her zeal to do good and be the person she dreamed of becoming was rekindled even more. But Debrii might soon find herself at odds with other super-powered teens that make up the S.H.I.E.L.D. funded Secret Warriors, who don’t want a repeat of Stamford history on American soil.

Powers/Abilities: Debrii is able to move masses of huge objects in her immediate vicinity at will, and is capable of manipulating many such objects at one time. She can use any “debris” around her to defend herself from attacks, or to attack her enemies. She can also break objects down to create multiple projectiles. Debrii was originally considered a “low-level telekinetic”, and it was suggested she could only telekinetically move objects she could otherwise physically lift. However, the truth is that Debrii is in fact a more powerful telekinetic than others as it requires greater skill to control multiple objects at once. While she cannot control organic matter, she can levitate herself and others by manipulating her clothing and other items (though she cannot really fly).