There are few things that can measure up to the memories of early Saturday mornings as a kid. With the perfect combination of a giant bowl of cereal and Saturday morning cartoons, what more did you need? And to celebrate those sugar fueled days of yore, for the next couple of weeks here at Nu-Perspective, we’re bringing the revamp love to some classic cartoons. First up, from that classic environmental conscious cartoon Captain Planet, we bring you KWAME!!

Google his original look and story, then read our take on him and let us know if you like what we did with him. Then see ya in 2 weeks with another Nu-Perspective.

Nu-Perspective is a column that features revamps and updates of various underdeveloped, underutilized and all-but-forgotten Nubian (black) characters specifically, showcasing them in fresh, contemporary and exciting ways both visually and story-wise.

Place of Birth: Unknown village in an undisclosed African country

Base of Operations: Worldwide

Story: There was a time when the world was in peril, and the spirit of the Earth chose five special young people to defend and protect the environment. One such man was Kwame of Africa, the unofficial leader of the Planeteers. But then things changed, and the hero known as Captain Planet no longer formed when their powers combined. The Earth Goddess Gaia fell silent, and as their powers waned, the world no longer seemed to have a place for the Planeteers. Kwame moved back to his homeland, and as the days turned to years he went back to school, eventually becaming an accomplished architect and renowned agriculturalist, starting his own company specializing in cutting-edge environmentally friendly technology to increase fertility and soil productivity in the most arid lands of his continent. One day, Kwame was approached by a little girl who seemed familiar. She was the resurrected Earth Goddess, who told him it was time to reform the Planeteers. But in a new age of corporate exploitation, social media and environmental terror from a boardroom, Kwame knew it was time to fight a smarter fight. He relabeled the group as environmental “superheroes”, and combined that with strong social media tactics, powerful branding, and the leverage of his company to attack corrupt companies on their own turf. Kwame sets out to create a new era of Planeteers for a new generation.

Powers: Kwame’s ring element is Earth. This gives him the powers of terrakinesis and botanokinesis, allowing him to create small, localized earthquakes, move rocks, turn mud to solid ground, control plants, and more. It has become known that Kwame possesses these abilities innately, and that the ring only enhances and allows him to focus these powers. The full extent of Kwame’s powers has not been demonstrated. In his years of retirement, Kwame has gained impeccable knowhow in the field of engineering, geology, petrology and mineralogy. He also has a keen intuition on weather patterns and sudden changes in the atmosphere gleaned from his years as a farmer. 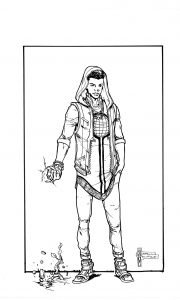