What’s up peeps!! On behalf of the Nu-Perspective team I would like to offer my deepest apologies for the missing posts. August has been a hectic month and well, life being life, it reared its’ ugly head at all the wrong moments. With that said, it’s September and we’re going to be dropping EXTRA characters to make up for my slacking, with a dedication to one of my all-time favorite groups. But more on that later. Right now, we’re just happy to present what would’ve been August’s entries. A theme close to our hearts…and that is: CARRIBBEAN CHARACTERS!! (((AIRHORN)))

Yup! And we are turning the lens to a few characters you probably didn’t know were from the Caribbean. First up, Masquerade!! From the brilliant Milestone Universe line, Masquerade is of Jamaican descent and is also notable as the first transgender character in comics.

Be sure to Google Masquerade’s original look and story, and let us know if you like what we did with the revamp. Then see ya sooner than ya think with another Nu-Perspective. 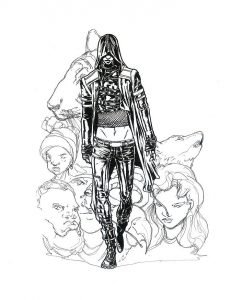 Story: The being “Masquerade” was exposed to the mutagenic mist of the Big Bang incident, becoming a “Bang Baby”. Long abandoning her original name and identity, Masquerade preferred the form of an African-America male, and considers themselves to be transgender. Originally part of the infamous super-powered Dakota gang known as the Blood Syndicate, Masquerade betrayed them on two separate occasions. The second time, he/she was shown mercy by former team-mate Wise Son, and allowed to go free. Now hopping from identity to identity, Masquerade seeks penance by avenging wrongs as a solo vigilante. An urban wraith moving seamlessly in and out of people’s lives, someone who is both anyone and no one at the same time.

Powers/Abilities: Masquerade’s unstable molecular structure allows him/her extensive shape-shifting properties to imitate or morph into any person or creature at will. With animals, there is a relatively narrow range of deviation with regards to weight and mass, preventing him/her from becoming as large as an elephant or as small as an insect. Experimentation by The System further amplified this power, allowing Masquerade to transform into inanimate objects as well and even fictional or imaginary beings. It must be noted that Masquerade still has concealed vital organs when impersonating inanimate objects. This experimentation also allowed him/her to imitate the abilities of super-powered beings, however the only way Masquerade can mimic their powers is through consuming blood or flesh of the desired individual. Those powers can only then manifest once in the form of that person. Due to extensive experience with his/her powers, Masquerade is a master of deception and impersonation.