We’re getting closer to the end of September and Nu-Perspective has been dishing out the extra goodies all this month. We hope you’ve been enjoying this month’s theme of THE NEW WARRIORS so far!!!
Our penultimate entry is a character that could easily be written off as a joke, but in the hands of Nu-Perspective I think we could have something special. The kid known as RAGE!!! As usual, do yourself a favor and Google this entry, then let us know if you like what we did with our take. Then see you in a few days for another Nu-Perspective. 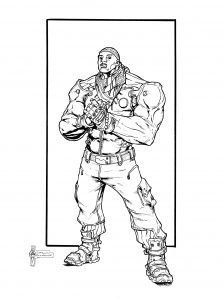 Story: At the tender age of 12, a tragic accident involving young Elvin being bathed in toxic waste gave him a superhumanly powerful adult body in a matter of months and granted him superhuman strength.. Elvin was compelled by his devoutly religious grandmother Granny Staples to use his new powers for good, and he became the vigilante Rage. He would later join the super-powered teenage crime-fighting team “New Warriors”, with Warriors leader Dwayne Taylor (Night Thrasher) eventually becoming Elvin’s legal guardian after Elvin’s grandmother was killed right before his eyes leaving him an orphan. Even when the New Warriors were disbanded – over and over again – Elvin remained ever committed to being the “anti-bully”, protecting those who could not protect themselves and a proud representative of the African-American community. This commitment extended all the way to Elvin even becoming a martyr under the racially prejudicial judicial system, where he suffered severe brain damage after being brutally attacked by inmates while incarcerated and left in a coma. He would meet his end when, after recovering from his coma, he perished during the symbiote-poison outbreak in Manhattan. Miraculously returning from the dead, Elvin comes back with a rejuvenated purpose. Learning the true secrets of his powers, Rage rejoins Night Thrasher and the old New Warriors, starting anew, seeking answers to his resurrection and dedicating himself to becoming a better role model in the vein of other Africa-American vigilantes.

Powers/Abilities: Elvin has the ability to increase his physical strength and durability proportionally to his emotional state, initially via intense feelings of anger or rage. (In his resurrected state Rage has become more serene, and now absorbs the intense emotions of his opponents) This power has made him impervious to small arms fire, blunt force impacts and even blades. This ability also enhances his speed and stamina far beyond normal human limits. Elvin also has accelerated healing (not a true regenerative healing factor), and his body physically increases in size to match his growth in strength. During his coma, and confirmed after his death and resurrection, the accident that gave Elvin his powers actually granted him access to the same extradimensional force that powers Hulks (the same way the gamma radiation triggered their mutations). By being indirectly connected to this inexhaustible “Hulk-force”, the upper limits of his strength and speed are unknown, but theoretically it can be on par with other Hulks. Unlike other Hulks however, he cannot maintain this state for very long, as he still has physical limitations on how much his body can accumulate and adapt to. In addition to his super-powers, Elvin also has some hand-to-hand training from both Captain America and Night Thrasher, which makes him a formidable brawler.