March brings International Woman’s Day, but we wanted to extend that love beyond the dayso we have revamps of two female characters this month. First up is “Rocket”, from the Milestone Universe. This former sidekick gets the Nu-Perspective below.

Check out her original look and story, and let us know if you like what we did with her. See ya in 2 weeks with another Nu-Perspective.

Story: After a chance meeting with Augustus Freeman IV, (a super powered alien disguised as a human) Raquel Ervin convinced Augustus to become the superhero Icon, and to take her on as his sidekick, Rocket. Soon after she started her career as Rocket she discovered that she was pregnant. The combination of this, and Icon’s departure from Earth, led Raquel to temporarily surrender the identity of Rocket to a friend. Raquel continued to provide guidance to her replacement even after her son was born, but she was soon forced to reassume the identity of Rocket once again. Soon after Raquel again went on a hiatus to continue to raise her son Amistad and provide a better life for him. But after a new Bang Baby epidemic, people with powers became society’s new scapegoat. With no one to defend them, and tensions rising with a new anti-powers legislation infringing on their human rights, Raquel took it upon herself one more time to fight for social justice and the new disenfranchised of Dakota. Though she runs the risk of endangering her civil identity and the family she is trying to raise, she has reached out to a new generation of Bang Babies as well as old acquaintances for help; because if there’s one thing Ervin knows about its inspiring others and making a difference.

Powers: All of Rocket’s superhuman powers derive from her inertia belt. By using her belt, Rocket can manipulate kinetic energy, granting her some super strength, flight and a kinetic force field. Rocket can also use kinetic energy to increase the force with which she hurls an object, turning it into a dangerous projectile. This ability is limited to objects which she can lift and toss with her normal strength. By releasing her store kinetic energy in focus beams, Rocket can project powerful energy blasts from her hands. The belt’s functionality however has no effect on non-kinetic energy such as fire, gas or electricity. In addition, while a bullet may not penetrate her force field, slow or indirect close-range attacks or blade weapons, which have low kinetic energy, do not trigger the belt. As such, her actual costume has a special light-weight, Nomex-Kevlar bi-weave protective design. Rocket can also encapsulate foes in an “inertialess field” rendering them immobile. 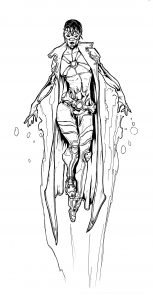