Comic creator Alexander Cutri, has delivered a wonderful creation to the world of comics in the name of Aiya. Within this story, we arrive into the world of Aiya in time to bear witness to the ignition of a civil war. A civil war that was brought on by what? Two brothers with different views on how this conflict should be handled. On one side we have one brother’s belief in the process of diplomacy and politicians, to provide the proper assistance to their people. On the other side, stands his brother on the side of action and violence. Both sides come with the same objective: to provide for their people. How far will both sides go to be the victor within this conflict? What is the fire that fuels this conflict? This is the world that Mr. Cutri has brought readers into, which leaves them wanting much, much more. I know that I do.

The story itself is enough to captivate your imagination, yet when you add the artwork, there is much more added to its substance and quality. I truly appreciate the darkness within this detailed work, and this is high quality work by Alexander Cutri and Bill Tortolini.  It adds a feeling of how dark the story’s events are, giving it that much more life. The dark art reminds me of the  art form of Japanese storytelling and artwork that is reflected in a few of the countries’ lesser well known films such as Dragon Head and Helldriver. The brilliant coloring adds a visually stimulating addition to the comic.

Issue #1 has left me anticipating the next issue. If Cutri’s work on Aiya #1 is any indication of future issues to come, this series will not disappoint. 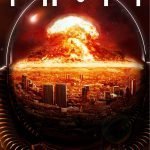 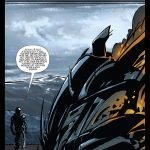 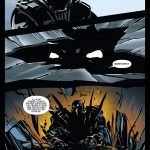 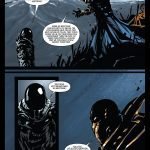