In an era where mainstream superhero comics are largely devoid of new ideas and innovation aside from putting new faces in familiar costumes and passing them off as “new” and “diverse” offerings, Lion Forge’s Catalyst Prime line of new and original superhero (or science hero as the company refers to them) comics has been one of the most inspiring breaths of air to hit the industry in a while. Hearkening back to the days of the early 90s when companies like Valiant, Malibu and Milestone- the company that gave Lion Forge Editor-in-chief Joe Illidge his start in comics- among others boldly offered new superhero comics that captured the imagination of a generation of readers, the Catalyst Prime line is a fine example of what comics can do, providing bold and innovative hero comics full of real diversity as exemplified by lead comic Noble.

Collecting the first four issues of the Noble series written by Brandon Thomas with art by Roger Robinson as well as the Catalyst Prime: The Event intro comic released for FCBD 2017, Noble tells an intricate story with a number of twists and turns to keep readers on their toes right until the end. Along the way, it touches on themes not often seen and puts an emphasis on true diversity by putting characters of various ethnicities in positions we are not often shown.

One of the highlights is the fact that the love between black astronaut David Powell- the titular hero who gaines superhuman telekinetic powers but loses his memories as a result of an explosion while saving Earth from an approaching asteroid- and his erstwhile Black ex-secret agent wife Astrid is a guiding force behind much of the book’s action as Astrid strives to put her and David’s shared life back together. It is a rarity in superhero media to see a black man and a black woman in love with each other and in the case of Noble it is especially refreshing to see Astrid not just filing the traditional sidekick romantic interest role but being a kick butt and take names character in her own right.

Beyond that, even seeing intelligent black and brown characters in non-heroic (for now I hesitate to call them villains) roles typically reserved for non-black and brown characters was refreshing. Noble makes clear that diversity isn’t just a marketing buzzword for the Lion Forge team, it is core to the line’s DNA. It goes without saying but it’s probably no coincidence this comes in a book written by a black man with an editorial team led by a black man.

All in all this collection of the first arc for Noble is, pun totally intended, a noble effort. Great art and writing drives a book full of action and great characters with a compelling story full of enough twists and turns to keep readers on their toes throughout. As I write this the Black Panther movie is just over a month away from opening in theaters- while Black Panther-related books would obviously be the primary beneficiary, it is my sincere hope that anyone new to the world of comics for whom that movie is a gateway checks out Noble as well as the entire Lion forge Catalyst Prime lineup. These are the heroes you are looking for! 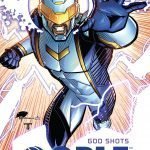 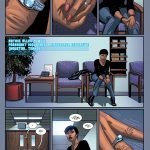 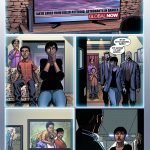 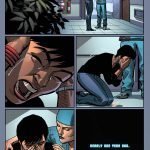