Suicide Squad: Hell to Pay, the 10th entry in the shared DCAMU (DC Animated Movie Universe) which began with 2013’s Justice League: Flashpoint, follows an eclectic team of low-tier super villains who are involuntarily forced to complete extremely dangerous black ops for high-ranking government official and bureaucratic sadist Amanda Waller (Vanessa Williams). This time around, the homicidal hodge-podge comprises of team staples Captain Boomerang (voiced by Liam McIntyre), Harley Quinn (Tara Strong) and Deadshot (Christian Slater), who are joined by ice queen Killer Frost (Kristin Bauer van Straten), deadpan cyber-contortionist Copperhead (Gideon Emery) and the stoic Black Bruce Lee Bronze Tiger (Billy Brown). Their latest mission is to find and retrieve a magical McGuffin that is essentially the (un)holy grail of lucky charms. But they are joined by not one but two other factions who are aggressively vying for the same thing, which leads into a three-way battle royale to the proverbial finish line.

The inclusion of Scandal Savage and Knockout is a bit deceptive, as from the trailers I was hoping for a “Versus” movie between the Suicide Squad and the “Secret Six” (a group very similar in premise and concept to Suicide Squad within the old DCU that garnered its own fan following). But alas that did not come to fruition here. However, they aptly make up for it with our third contender and dark horse team led by the diabolical Eobard Thawne – aka Reverse-Flash or Zoom (C Thomas Howell). 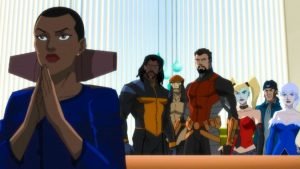 With so many bad guys/girls to juggle, both on the protagonist and antagonist sides and those tossed in for good measure, Deadshot – as usual – gets the lion’s share of attention, with other characters playing off his spotlight to varying degrees of development. Essentially, Floyd Lawton is the nexus from which the rest of the story flows, which isn’t a terrible thing as his conflicted character and levelheadedness makes for a sound anchor.

Besides the plethora of villains thrown on the screen, Hell to Pay actually suffers from its longer run time to its 2014 predecessor Batman: Assault on Arkham (which is set in the videogame-based “Arkham-verse”), which was a more focused and concise film that lived up to the tension and body count of the team’s name. There are lulls in the action that seem to drag on, as it devolves into a road trip movie rather than a heist film. The fight scenes are entertaining enough, despite the mismatch of power sets, but it compensates when one team tries to best the other in strategy and cunning.

In terms of animation, anyone familiar with the simplistic, yet robust style from the short-lived 2010 Young Justice series will know what to expect, as it has become ubiquitous within recent DC animated projects like the DCAMU and the CW Seed Arrowverse spin-off web-based miniseries (Vixen & Freedom Fighters: The Ray). It has certainly earned its place as the successor to master-craftsman Bruce Timm’s style which dominated his 10-year reign from “Batman: The Animated Series” to the finale of “Justice League Unlimited” [1995-2006].

What makes the idea of Suicide Squad resonate is not only the underdog story but adding a sliver of morality and empathy to people who are otherwise psychopaths, sadists, murderers, assassins and mercenaries. Particularly surprising is how much of a role and standout Bronze Tiger plays, rather than be relegated to “the black character”. His character arc parallels Deadshot’s all the way to the final cacophonic confrontation, and it seems well deserved when these two flawed men come to a mutual respect, if not admiration.

Overall, it’s the destination rather than the journey for Hell to Pay, which is an enjoyable entry in the DCAMU. With its action, decent characters and competent story with a plot twist sure to excite any hardcore continuity fan, you may just find yourself white knuckling it at the finale. However, Assault on Arkham may be the better, leaner experience for your Suicide Squad fix, even with the intrusive inclusion of Batman and the Joker.