From days of long ago…From uncharted regions of the universe…comes a review. The review about Voltron: Defender of the Universe!

Ok so quick backstory…I love the original Voltron. I digested the show as a kid. In 2016 when Netflix released a new cartoon as Voltron: Legendary Defender, I was instantly pulled back in. It is in this spirit that I review the Voltron comic book written by Tim Hedrick and Mitch Iverson. They have delivered a story that touches on the past goodness that was the old Voltron and given a good reflection of the new vision exhibited within this comic and the Netflix show moving forward. 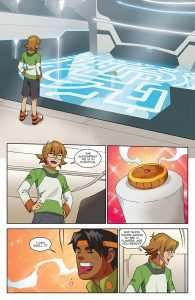 For the uninitiated, Voltron fights evil across the universe. It is made up of five lion robots that are piloted by individuals known as…wait for it…the Voltron Force. Ok, ok, so that was the old team. The new team instead calls themselves Voltron Paladins. When the team runs up against a strong enemy that they cannot defeat, the five lions combine to form a giant robot defender known as Voltron, ancient champion of the universe (cue awesome music). The book itself follows the Volton Force…I mean Paladins on a journey to help a displaced humanoid wolf race find a new homeland. The team is introduced with some basic hijinks that those that have watched the show should be well familiar with. They are interrupted by the aforementioned distress call and Voltron is once again off to save the day. 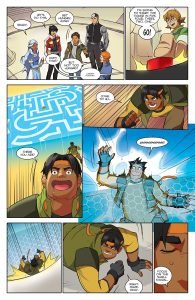 The writing here is precise, the story coherent, and the principle defined. However, the story lacks nuance and is somewhat predictable. That is not to say that it is bad. The Voltron formula is pretty well established, and the storyline sticks to specific themes. The “dark” moments are never too deep, and it is always balanced with humor. Character development is pushed to the background so that the reader can see Voltron crush the bad guys and save the day. If one is looking for political subtext or philosophical conflict, this is not the novel that will do that for you. The lighthearted nature of it makes it a good introduction for new fans and nostalgic fun for old heads.

My one issue with the writing is the reliance on problematic tropes to induce some humor. There are two female characters that fawn over and physically fight over one of the Voltron Paladins. In a book that has little character development, these two are literally written into the story as objects to be rejected by a man. In relation to this, that man is Hunk, the big guy of the team. Not only is he supposed to be undesirable because he is the “fat one” (hence the joke that the two women are fighting over the “unattractive” Paladin), but also the jokes about his love for food are tiring. Granted, the cartoon does some of this too and the comic is working off of it’s source material, but these jokes are borderline offensive and frankly, just not necessary in terms of the story. 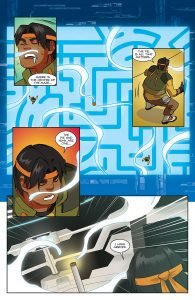 Artistically, the color pallete is bright and engaging as one could expect from a comic featuring a red, blue, yellow, green and black robot. The artists and colorists stuck to the script when it came to the stylized anime features of the characters and the use of a lot of primary colors. Just like the story, there is not a lot of boundary pushing here, but the work is solid and works in conjunction with the story elements flawlessly.

Voltron is a fun romp through a time when comics and cartoons could be fun and lighthearted. If you like your comic books to be full of multilayered themes, this one is not the book for you. But to fans of the shows in the 80’s or 2016, or if you like seeing giant robots and monsters duke it out in space, please go check out Lion Forge’s Voltron: Legendary Defender Vol. 2: Pilgrimage.