The BlackSci-Fi.com Online Campaign Corner/ The Crowding of Dragos #1: Fight or Surrender?
0 Comments 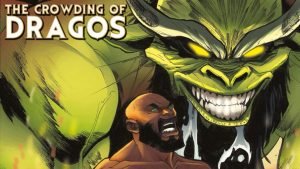 The Crowding of Dragos #1: Fight or Surrender?

THE STORY OF THE DRAGOS

In a world that has been decimated and destroyed, an ancient sect of beings, dragon shifters called The Dragos, have risen to power. Only a remnant of humanity remains and their survival hinges on their choosing to fight or surrender to The Dragos. When Salya Salastine’s younger brother goes missing in the barren lands that’s left of civilization, Salya ventures out to find him and faces the dangers of Earth’s new rulers.

The Crowding of Dragos is about love. It’s a paranormal shifter romance story. But we are introduced to the concept of love through a sister’s fight for survival — she is fighting to get to her brother, who’s somewhere lost in a world that’s viscous and is ruled by powerful shifter beings. Salya is willing to risk life and limb for him, she stands up against those who warn her that her journey is impossible. That’s where the story takes its roots — the true nature of what is love — loves impossibility but yet its inevitability and durability.

But sibling love is just the beginning. Again, The Crowding of Dragos is a paranormal shifter romance story so Salya’s journey will force her to face herself and all that is good and bad about who she is and what this world ruled by Dragon Shifters has done to her. Her hate for the Dragos will only be measured by her love for her brother and humanity, and just maybe somehow those two will blur and somehow possibly become one when a Shifter saves her life…

For more information on the campaign head here.