The BlackSci-Fi.com Online Campaign Corner/ The Other Side of Nowhere Vol 1
0 Comments 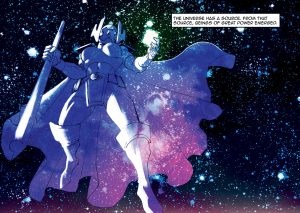 The Other Side of Nowhere Vol 1

The Other Side Of Nowhere is a 48 page hardcover graphic novel. It is the first in hopefully a 4 part series. This came about by me spending hours on Deviant Art looking for an artist to draw one of my stories. I came across Profesone’s page and immediately fell in love with his art. I sent him a few ideas he wasn’t really feeling them. We keep in contact for months. Then one day he sent me the designs of a monkey, a toaster, and a hot woman in a temple. He asked me to come up with a story for these characters. 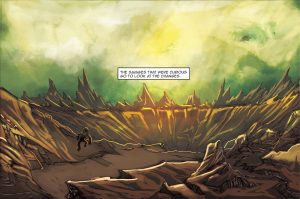 Dr. Cornelius Frankfort has felt like an outsider at the galactic think tank Thoth. He doesn’t know who he is or where he’s from. All he remembers is getting beat up the limping to a source of light then waking up smart. He was found by two scientist that worked at Thoth. He was a study but soon found become a student at Thoth then a doctor. He became obsessed with memories of his past at wants an explanation, making it his life’s work. He finds a map that leads him to what he thinks is not only his origin but the origin of us all.

The Other Side Of Nowhere is a science fiction adventure inspired by Jack Kirby.

For more information on the campaign head here.