The Black Cinematic Universe is being built

Studio 8 is teaming up with the creative team of the Black  comic book series to adapt their critically acclaimed series into an interconnected film universe. Black focuses on a concept where only Black people have super abilities, and how the world reacts to them.

From THR: Black — also known as Black [AF] — debuted in 2016 from indie publisher Black Mask Studios and centers around a simple concept: Superpowers exist, but the only people who have them are black. The original series followed Kareem Jenkins, who discovered his powers after being shot by police. A subsequent graphic novel called Black [AF]: America’s Sweetheart focused on Eli Franklin, a young girl who works to become the world’s first superhero in an attempt to bring America closer together and bridge racial divides. 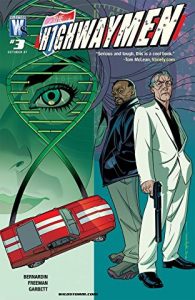 Highwaymen is getting the big screen treatment

Highwaymen, a series created by Genius  creators/ writers Marc Bernardin and Adam Freeman, is reported to be getting a big screen treatment at New Line Cinema. DC Films has reportedly hired writers to adapt the 2007 limited series, which according to Dark Horizons, “followed a pair of elite deliverymen with a special knack for handling hazardous cargo, who are now both over the hill and separated by bad blood. The retired pair are then reluctantly called back into action”.