Hello and welcome to Blacksci-fi.com’s coverage of the 2018 Electronic Entertainment Expo or what industry folks call E3. This is arguably the biggest conference for the video game industry, and all the major players come ready to announce upcoming projects, games, and hardware that further consumer excitement and set media buzzing with all the goodies that are coming soon. Sit back and relax, while BSF.com gives you the relevant geeky news comes out this week. Next on the list: Microsoft.

Microsoft has stumbled in past presentations for the current console generation, and has subsequently spent the last few conferences trying to make up for that with a recommitment to Xbox’s gaming roots. This year’s offering was certainly a blitz of games, with some classic characters teased and some new treats dropped. Let’s take a look at what Microsoft had to say on Sunday, June 10, 2018.

What better way to get the show started than with Halo: Infinite, the next chapter in Master Chief’s intergalactic story. We have no word on story details or release date, but seeing that iconic helmet got fans buzzing with the possibility of Halo’s future.

Nothing gets me more excited for a game than Terry Crews screaming at me. Ok, so maybe they could have gone about the trailer a little differently, but the long anticipated game finally has a new release date of February 2019. For the uninitiated, Crackdown 3’s release has been postponed multiple times, including after last year when a playable version was shown at E3 2017. The 3rd person multiplayer extravaganza finally looks ready for primetime and will be added to the amazing slate of games set to release next spring.

Gears is another huge property of Microsoft and they were going to have a riot on their hands if they stuck with their original announcements. Gears Pop!, a cute game created in partnership with Funko, is set to  hit mobile devices sometime in 2019. Gears Tactics will bring turn based strategy to PC’s sometime next year as well. But the big announcement of Gears 5 and accompanying trailer almost stole the show, with new crisp graphics and a further deepening story, this 3rd person shooter is sure to wow fans when it arrives in 2019. 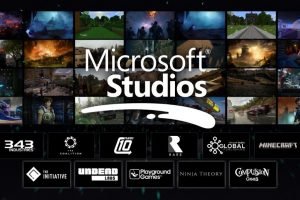 Microsoft has added five new studios to its portfolio to increase its presence of first party games. The Initiative, Undead Labs, Playground Games, Ninja Theory, and Compulsion Games are now a part of the Microsoft family. Playground Games Forza Horizon 4 looks beautiful, and Compulsions upcoming We Happy Few looks like a surreal journey into and interesting dystopia that is sure to leave players haunted by its captivating story.

With another presentation comes another subscription-based service announcement. Xbox’s Game Pass was revolutionary to offer first party new titles within its monthly subscription fee. Instead of the expected announcement of a premium model like was presented at EA Play for their Origin Access service, Xbox Game Pass will continue to offer all its new first party titles on the same release date as their physical copies. To sweeten the deal, they have also added Elder Scroll Online, Division, and Fallout 4 for download immediately.

Just when you thought it was over…CD Projekt Red lights the world on fire with Cyberpunk 2077. From the creators of the acclaimed Witcher 3 comes the futuristic, Grand Theft Auto-esc dystopian world that has been in development hell since 2012. Now it looks like tabletop and video gamers dreams will finally be realized as an announced release year of 2019 has been promised.

Ninja Theory’s Devil May Cry 5 looks like it brings back the goofy, monster slaughtering goodness of the original series after the debacle remake, DmC. However, this is another game set to release spring of 2019 with a huge slate of games set to come out at the same time.

Thank goodness that Shadow of the Tomb Raider is coming out. This series has been critically praised for quite some time now, but other blockbuster titles seem to drown out its welcome when the series released previous versions in years past. It looks like Lara Croft will finally be able to get out of other games shadow by releasing in September of this year.

What on earth is Jump Force and may I please have another? This trailer dropped out of nowhere with anime favorites battling for supremacy. I have no idea where that idea came from, but I hope it is executed well.

I could go on and on about Dying Light 2, Cuphead 2, PUBG, Division 2, Metro Exodus, Sea of Theives, Kingdom Hearts, Ori, and the rest of the massive amount of games that Microsoft showed off today. But that’s the point, isn’t it? Microsoft showed today that they are all about games and gaming, pulling a complete 180 from the “entertainment console” buzzwords from years ago. They have backed up their words with action, and I for one am excited to see where this takes them in the future.

That concludes BSF’s coverage of Microsoft. Stay tuned throughout the week for more updates.