Patrons who climbed the stairs to Red Lounge  in uptown Washington, D.C. this past weekend were met with flickering lilac colored lights, walls plastered in comic book pages, and locally sourced art featuring heroes and heroines from real life and the blockbuster film.  The two story pop-up, “Enter Wakanda,” launched last Friday in a beloved, longstanding D.C. dive bar, and the transformed space has drawn over 4k visitors since its debut.  The brainchild of Jason Kelly, the event began as his idea to bring his friends and members of his networking collective together for a celebration centered around the film.  Then his biz bestie, Greg Jackson, suggested he expand the idea to a three-day blowout fest over the course of the long President’s Day weekend.  The result?  A lituation of Wakandan proportions.

The first floor was an Instagrammable art exhibit that spanned the entrance of the bar to the back of its narrow space.  Marvin Gaye, Jay-Z, and Colin Kaepernick were among those immortalized in acrylic, but there were also renderings of the fierce Dora Milaje general, Okoye. 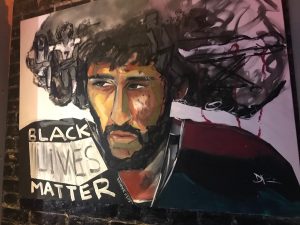 Cutouts were strategically placed throughout the bar for easy photo ops.  An M’baku one (a fan favorite) was positioned in the selfie booth on the first level, but this bad ass Killmonger cutout was easily the ruler of the second floor. 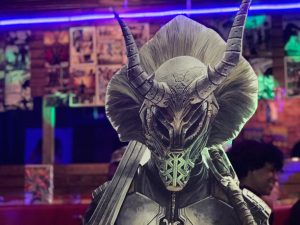 Patrons also sat for tribal face paint designs on the upstairs dance floor before heading to the bar to sample drinks called “Heart of Wakanda,” “Vibranium,” and “Queen’s Cup.”  But the biggest attraction was the lounge’s seating area furthest to the back on the upper level, which had been revamped to include a wicker throne, props, and Black Panther inspired mannequins. The setup provided an ode to the film, and offered patrons the chance to recreate an iconic photo from a real Black Panther. 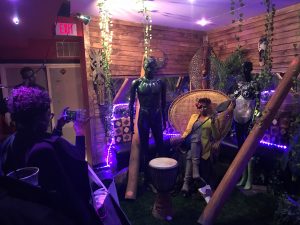 When asked how he felt about the overwhelming success of the bar, Kelly was quick to point out that the elements that made the movie great are the same ones that made the pop-up bar so popular.

“It’s just a vibe,” Kelly said with a smile tinged with exhaustion.  “The discussions about the movie, the energy in here–it’s all because we were able to come together around something great.  But we put a lot of effort into it too.  Look around…we totally redid the place.” 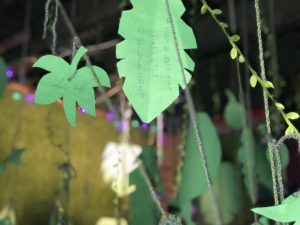 He was right.  While some of the smaller details were consumed by flickering purple lights and others more pronounced, altogether they created the ambiance Kelly and his fellow planners had hoped for, and a memorable experience that D.C. bar goers and blerds will be talking about for years to come.

M’Shai S Dash is a freelance writer and blogger from Washington D.C. She’s a pop-culture connoisseur and Legend of Zelda fanatic who writes about blerd culture, social justice issues, and Afrofuturism. Dash is currently a staff writer for Blacksci-Fi.com.