By now the majority of the world has seen Black Panther.  The impact it’s made on the world since its premiere has been phenomenal, inspiring think pieces in epic proportions.  I’ve read a few as  I’ve reflected on the impact Black Panther had on me–pondering it over in my mind for the past two weeks, trying to find the right words to send my own thoughts into the inter-webs.

You see, I knew I wanted to write about the film immediately after watching it, but I also knew that there would be so many awesome writers out there who would speak on a lot of the ideas that immediately came to my mind, so instead, I let the many messages I received marinate awhile, while I read the thoughts of others.  While I’ve seen some beautifully written and thought-provoking op/eds on the many take backs from the film, one I still think needs a little more exploration is the symbolism of those heart-shaped herbs that delivers a power potent enough to enable a person to rule the world. Because, while many people were focused on the vibranium, I connected more with the herb. 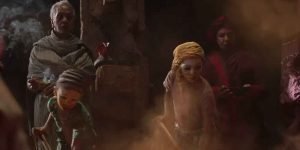 As a lost child of the diaspora rooted in an American culture that isn’t exactly my own, but one my people have shaped magnanimously,  I’ve yet to feel as though I belong in this country fully.  It’s as if the spirits of my ancestors who were sold to the pale skinned villains our country recognizes as founders remain in a constant state of unrest–and so they trouble the waters in our realities so that we may speak for them.

So how does Wakanda fit into this?  Wakanda to me is where the roots of our existence lie.  It’s that magical place in the universe that perfectly encompasses what every brown child of the diaspora imagines when they first hear the name “Africa”.  Many of my earliest glimpses into the magic of Africa came from films.  From The Lion King to Coming to America, and now Black Panther. Even as an adult, when I see glimpses of life in Africa on the big screen, I yearn for it to become real.  And though I know there is truly no place in the world filled with faeries and unicorns, and vibranium doesn’t really exist (or does it?), seeing a world like Wakanda is an escape from a reality I wish I could trade for the imagined one.

Films like Black Panther provide  a glimpse into a future I very well could have belonged to presently. Knowing what I know now about who really built the pyramids, who created science,  whose traditions, rituals and magic have become the most copied in the world, I know had our ancestors been left alone our empire would be like none other in history.  They knew that then, and that’s why they deceived our brothers who remained and crippled those they managed to steal away.  WE SHOULD HAVE NEVER LET THEM IN!

But, time is the oldest teacher of them all, and through time, I’ve witnessed many of my brothers and sisters of the diaspora slowly and surely begin to remember our power.  Through the digital age, we can now become reacquainted with the traditions and rituals of our ancestors that will in time help us to reclaim our birthrights.  As I continue to unlearn the falsehoods I’ve been taught, clarity is setting in.

It’s quickening in my spirit and stimulating my brain–positioning me to lead my children toward the truths of who we are that have been hidden from our people from too long. We are more than the melanin coated skin we are housed in–we are embodiments of light. No other people on earth have been hunted, deceived, and attacked more than we have, and there’s a reason why. We are magic!

So, what are those heart-shaped herbs really? It’s our traditions, our beliefs, our culture, our heritage. It’s the remnants of our gods, and the memories of our forefathers. It’s also a symbol for the source of our true identities–the one they don’t want us to discover.  They thought they could burn it all, but the seeds still remain. Never stop searching for them.