Creator of the groundbreaking and award-winning comic strip Mama’s Boyz, Jerry Craft is longtime and well-respected veteran of the comic industry. A native New Yorker for whom the city is always near and dear, Craft is one of the founders of the Schomburg Black Comic Book Festival, a celebration of the rich tradition of Black comix featuring panel discussions, film screenings, a cosplay show, and exhibit tables with premiere independent Black comic creators from across the United States. This year’s 6th edition highlights will include panels and discussion on topics including diversity and social justice in comics, black comics in digital spaces, black masculinity in comic books and is going down this weekend. BlackSci-Fi was pleased to speak with Jerry about the upcoming show.

BlackSci-Fi.com: This will be the 6th year for the Schomburg Black Comic Book Festival (SBCBF)- what are your thoughts on the show’s growth and its impact on both the black comic community and larger comics community in general?

Jerry Craft: The growth of the SBCBF has been nothing short of astounding. Especially when you think back to our initial gathering back in 2011, at the Hue Man Bookstore, where we were elated to have 100 people attend.

The impact is also pretty astounding. During our first event at the Schomburg in 2013, I remember being afraid to invite people from out of town because I didn’t know if it would be worth their travel time and expense. Now we have people coming in from all over the country and Canada as well.

Now our festival is on a lot of people’s radar. In fact, last year I noticed a lot of editors from large publishing companies who obviously came to check out the talent. Hopefully that will lead to a whole new crop of books featuring African-American characters.

As far as the fans themselves, that has been the most amazing part. It’s like when I saw the movie Get Out, and I was like, “Oh wow, someone finally made a movie for me!” That’s what we do. We are writing and drawing stories for you!

BSF: Have there been any moments from past shows in particular that have stood out to you as favorites? Any specific interactions and/or connections made that might otherwise have not been possible without the show?

JC: Absolutely! We had a Mom stand up during a panel and talk about how she had always discouraged her son from reading and drawing comics because she thought they were silly. But once she saw the love and pride that our work has inspired, she said that she owed him an apology and would do what she could to support him.
And we have all made so many connections and been featured on outlets such as NBC, Fox and the NY Times, to name a few. I have a graphic novel coming out from Harper Collins next year and can’t think of a better place to launch it! 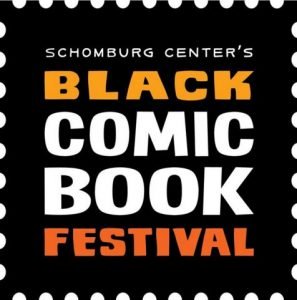 BSF: The show will take place about a month before the Black Panther comes out in theaters and one of the event’s panels is “Black Panther: A Hero and A Movement”- in light of some recent conversations regarding the potential impact of the movie on independent black comic creators and creations, what are your thoughts on this topic?

JC: I think that it will have a positive impact. We want to make it clear that we don’t hate Marvel or DC. In fact, me and my fam will see the movie on opening day and I’ll be wearing my Black Panther T-shirt. But you have to show the powers that be that having us as heroic leads can be financially lucrative. That’s all they want to know. They don’t care about instilling pride in us. BUT if, I mean WHEN, this movie does well, they will look to hire more people to tell those stories and create those characters. Thus opening up some major opportunities for our creative family.

BSF:  Do you have any hopes or goals for the show, either in terms of specific things or just general?

JC: Our main goal is composed of many goals. The first is to inspire our readers. Professor John Jennings (one of the four co-founders along with Professor Jonathan Gayles, Deirdre Hollman and myself) always says, “if you see it, you can be it!” So it is wonderful to create a space where fans can come and see characters that are heroes as opposed to only sidekicks or gang bangers.

Second, it promotes reading. People always like to say that kids of color don’t enjoy reading, and I didn’t either. When I do my school visits, the first thing I tell the students is that I was a reluctant reader as a kid. But I think partially it was because most of the books were about slavery and the civil rights movement. Our kids deserve to escape from reality, too. Why do they constantly need to be reminded of how painful their life is? Give them a comic showing a Black hero saving the world!

Third, we try to teach our creators not to look at each other as competition. Now if you want to use that as inspiration to step your game up, then by all means, have at it! But we can’t continue to sabotage and discredit others just because they are better or have risen above us. Maybe they work harder! I hate to see how as soon as someone gets a book for Marvel or DC that they are labelled a “sell out.” What other group of people attack someone for being successful? We still need a lot of work. The only kind of “Selling out” that we should be concerned with is selling out our inventory!

We try to instill in our creators that the better one of us does, the better we all do. Here are my favorite two proverbs: “If you want to go fast, go alone. If you want to go far, go together.”
The other is “A rising tide lifts all boats.” So instead of focusing on one book, our plan is to strengthen our industry. Then there will be enough for everyone.

And finally, we need to teach our fans that we really do need them. I published my first Mama’s Boyz comic in 1997, and if it were not for fans looking to buy my product, I’d be working at Popeye’s now. (Not that there’s anything wrong with that.) Now I’ve written / illustrated close to three dozen comics, picture book, middle grade novels and graphic novels! 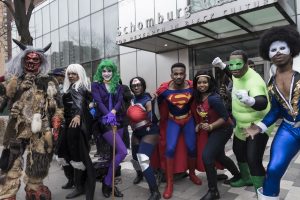 The financial component is REAL! Sure we all like to get pats on the back and be told how the community needs us, but at the end of the day, we need financial support. Since its inception in 2013, close to 40,000 people have attended the Schomburg Black Comic Book Festival, so I know we are on the right track.

For more information about the convention head here.