We end March and the celebration of International Woman’s Day, with another visit to the Milestone Universe. This week we shine the spotlight of the armored warrior TECHNIQUE.

Check out her original look and story, and let us know if you like what we did with her. See ya in 2 weeks with another Nu-Perspective.

Story: Once the enemy and then protégé to the armored vigilante Hardware (Curtis Metcalf), Tiffany Evans was handed the reins to Curtis’ corporation Hard Company, and became the capable President and CEO of the high-end security, tech and cybernetics conglomerate. In time, Hard Company transformed Dakota into one of the most technologically advanced places this side of the Western hemisphere, seemingly rendering “Hardware” and “Technique” obsolete. Until a series of industrial and terrorist attacks against her company begins occurring, taking Tiffany back to the early days of similar attacks that first caused her to build the Technique armor. Evan’s investigation leads to a trail of the debunked Alva Technologies and a conspiracy involving an anti-technology sect. Before Dakota becomes another war zone, Tiffany dons the latest version of the Technique armor to set matters straight.

Powers: All of Tiffany’s superhuman abilities are derived from her Technique armor.

Physical Abilities: Tiffany has genius-level intelligence, and is a foremost authority on cybernetics and advanced computer programming. She is also an accomplished inventor, having developed her own armor as Technique, and modifying Hardware’s armor. She also has a black-belt in Aikido and ju-jutsu.

Paraphernalia/Weapons: The Technique armor is a patented lightweight, highly durable super alloy, rendering it night-indestructible, withstanding cannon fire at close range without a scratch. It also has a polarized liquid metal endo-skin that solidifies into a malleable “under” armor for dexterity. The suit of armor has an internalized power source that fuels the suit of armor’s many functionalities, such as mid-ranged jet-propelled flight and its omni-cannon. The armor also enhances her physical prowess far beyond human levels, enabling her to lift up to 20 tons, and move at trans-sonic speeds. Upgrades have been made to the other concealed miscellaneous devices, gadgets and weapons of varying functionalities including a more powerful maser, plasma sword and nano-tech firearms. The on-board computer (DOBIE 3.0) in her helmet amplifies and augments her senses as well, relays intel and has hacking capabilities. 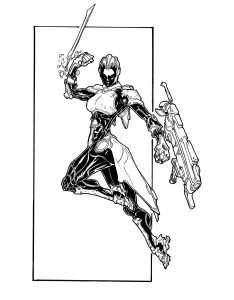