Nu-Perspective is a new column featuring redesigns and updates of various Nubian (black) comic book characters. The aim of the column is to spotlight underdeveloped, underutilized and all-but-forgotten black characters specifically, and showcase them in fresh, contemporary and exciting ways both visually and story-wise. Co-creator Shawn Alleyne (Artist/Writer) believes that any character has the potential for greatness with enough care and imagination. Along with co-creator Fabian Wood (Writer), these characters, whether hero or villain, will be pulled from any book or company, indy or major, and given the revamp treatment. In some cases these revamps can be a light dusting off the character, or in extreme Mort-status, a complete overhaul. If you have a favorite character you would like to see in a “Nu-Perspective”, feel free to let us know. The column will be featured on the Black Sci-fi site and will run bi-weekly. 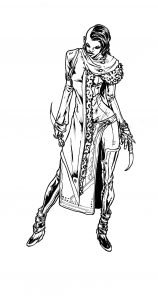 With February being Black History Month, (and now it seems a national holiday for the Black Panther movie), we decided to focus on characters from the Black Panther universe. For our first entry, we have “Madam Slay”. In the current continuity of the character, Madam Slay was a lover and ally of Erik Killmonger, BP’s most popular villain. Nu-Perspective pick’s up right where her last defeat ended, and comes out the gate banging with TWO revamps for the price of one. Check out her original look and story, and let us know if you like where we took her.

And if you would like a deeper behind-the-scenes look at the creation process, read Shawn’s blog here:
www.shawnah-lean.blogspot.com.

Base Of Operations: N’Jadaka village, Wakanda

Powers: Previous to her transformation Madam Slay already possessed control over leopards through unknown means. Now, due to divine empowerment, Madam Slay has psychic control over all feral felines, and has been granted enhanced physical strength, speed and agility. In her were-leopard form she has all of these attributes to a greater degree plus enhanced senses, razor-sharp claws and teeth, a healing factor and a pheromone ability allowing her to manipulate all men. Madam Slay is an exceptional hunter/tracker, an expert hand-to-hand combatant and proficient with bladed weapons. 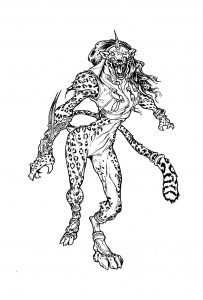