Man, time really DOES fly when you’re having fun. Welcome back to another edition of Nu-Perspective, the only redesign column for us, by us. We feature revamps and updates of various underdeveloped, underutilized and all-but-forgotten Nubian (black) characters specifically, and showcase them in fresh, contemporary and exciting ways both visually and story-wise.

With the release of Avengers: Infinity War upon us, no doubt soon to be the biggest superhero movie to date, we decided to spotlight 2 former Avengers. First up was Goliath, and to close out April we give you TRIATHLON!!

Google his original look and story, and let us know if you like what we did with him. Then see ya in 2 weeks with another Nu-Perspective.

Story: Delroy Garrett, Jr was last shown to have been among the superheroes on the run following Hydra’s takeover of the United States. He was apprehended by Deadpool who was working as a member of Hydra’s Avengers at the time. With the status quo restored, Delroy was released with a pardon, but feelings of disillusion and disgust by his treatment plagued his thoughts. The shame fromsuccumbing to his previous addition to performance enhancing drugs broke him down also, but after consoling by Goliath, and some honest self evaluation, he beat his habit and became determined to be a better superhero and eventually outshine the likes of Captain America and his super soldier peers. However, he questioned the role of the black superhero in the landscape of powered people, and his own connection to his people. He became more in touch with his African identity, and reflected that in his new costume that he modeled after Afrofuturist art. He now seeks to be seen as a leader of a new Avengers team, one more in serving the Black Lives Matter movement.

Powers: While possessing triple the strength, speed, endurance and durability of a person in peak physical shape, Triathlon can also think three times as fast. While not increasing his IQ, he can analyze and solve situations as well as process new information much quicker than a regular human. This has allowed him to enter a state of “hyper awareness” which also amplifies his senses to three times their normal range. Although he does not possess a true healing factor per se, Triathlon can heal from wounds and injuries three times quicker that a normal person could. He previously displayed the ability to see disguised Skrulls, and this power was both erroneously believed to be tied to the special googles worn by the original 3-D Man, and to apply only to Skrulls. However, this enhanced sight extends to seeing all true forms: detecting Skrulls, illusions, possessions, etc, and does not require special glasses. 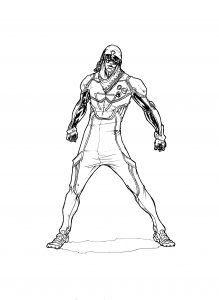