Summer is about to get a lot hotter. Welcome back to another edition of Nu-Perspective, the only redesign column for us, by us!!! We feature revamps and updates of various underdeveloped, underutilized and all-but-forgotten Nubian (black) characters specifically, and showcase them in fresh, contemporary and exciting ways both visually and story-wise.

We’ve been chomping at the bit to get to this month’s characters.  First up to bat, the man that shaped the path of young vigilante teams for years to come- NIGHT THRASHER!! The potential for Night Thrasher (and subsequently, the New Warriors) is infinite.  Hopefully Marvel realizes what they have and give him the respect he deserves.

In the meantime, Google his original look and story, and let us know if you like what we did with him. Then see ya in 2 weeks with another Nu-Perspective. 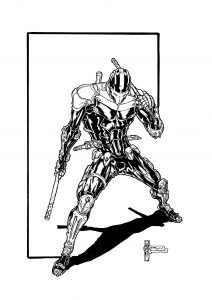 Story: A self-made man living in a world of super-powered individuals and cosmic beings, Dwayne Taylor was always about protecting the common man from these incredible threats as the vigilante, Night Thrasher. Founding a team of super-powered teenagers called the “New Warriors”, Night Thrasher’s life followed the ebb and flows of vigilante/superhero life with many adventures. However, this road took its’ most drastic turn for the worst when the New Warriors ended up as reality show stars and wound up at the epicenter of the infamous Stamford incident that sparked the first civil war between Earth’s greatest heroes. Night Thrasher was presumed dead, but in reality, he was snatched from death by the Collector to be an unwilling participant in his “Contest of Champions”. Only recently been brought back to Earth, Night Thrasher learnt how far the New Warriors and his legacy had fallen in his absence. Steeling his resolve once again to build himself back up, Dwayne reveals himself to his former teammates, hoping to reunite the New Warriors with the goal of rising above their past mistakes and shortcomings and becoming a beacon of inspiration in a new generation of super-powered teens and vigilantes. But first, they will have to contend with opposition from the S.H.I.E.L.D. sanctioned Secret Warriors who do not want a repeat of history.

Powers/Abilities: Aside from his passive ability that makes him immune to psionic attacks, Night Thrasher is a man in peak physical fitness. Having trained in various forms of martial arts, Night Thrasher’s time in the “Contest of Champions” has further enhanced his hand-to-hand, firearms and weapons combat proficiency to match enhanced humans. Night Thrasher is also a highly skilled skateboarder and an efficient hacker.

Paraphernalia/Weapons: Battle Amour – As an expert engineer and weapons designer, Dwayne’s Night Thrasher armour is of a military-grade light-weight bullet resistant and fire retardant material. It is also outfitted with a high-tech thermo-optic camouflage lining. The armour suit also comes with two multi-purpose wrist gauntlets that can, among other functions, launch a grapple line, discharge a powerful electric current (mimicking his brother’s former mutant power), a hacking interface, retractable blades, as well as fire bullets. The mask and goggles on the armour have various audio and visual enhancements, breathing apparatus, and more. The suit itself has hidden compartments for caltrops, smoke pellets, mini explosive and other devices and gadgets. Night Thrasher is never without his trademark Escrima sticks and a hi-tech customized skateboard that has reverse-engineered repulsor discs of mobility and speed.