Ahhhhh yeah!!! September keeps rolling along and Nu-Perspective has no plans of slowing down. This month’s theme features members of THE NEW WARRIORS!!!

Our next entry is the multi-layered character SILHOUETTE. If you don’t know who she is this amazing character is worth the Google search. Let us know if you like what we did with her and then see ya sooner than ya think with another Nu-Perspective. 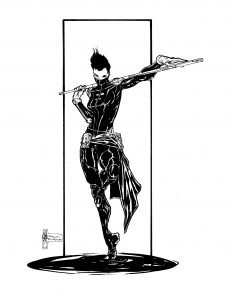 Story: Silhouette was born a mutant, electively bred by a Cambodian cult to be part of a chosen “superior race” capable of harnessing a well spring of raw, primal energy called the “Well of All Things”. Silhouette and her brother Midnight’s Fire were left abandoned in Chinatown by their mother who faked their deaths. Originally embroiled in the local gangs growing up, an altercation with a rival gang leader steered them into a path of becoming vigilantes. It was around this time she met and fell in love with Dwayne Taylor (Night Thrasher) who surprisingly was shepherded by her father Andrew Chord. Shortly thereafter, Silhouette became paralyzed from the waist down after a bullet pierced her spine. Undeterred by her impairment, Silhouette continued to be a vigilante, eventually joining the New Warriors. Eventually tension between her and Night Thrasher caused her to leave the team. With the help of a cutting-edge implant courtesy of Parker Industries, Silhouette has recently regained the use of her legs. Still, she finds herself lost and discouraged without Dwayne in her life, but is awestruck to find him alive and reforming the original New Warriors. But as old love is rekindled, old grudges are being stroked, as Midnight’s Fire has also returned.

Powers/Abilities: Due to her peculiar conception, Silhouette was born with a connection to the Darkforce – an inter-dimensional infinite void of amorphous darkness. This imbued her with the ability to teleport short distances through shadows via “shadowmelting”. After a disturbance in the Darkforce that affected everyone who used it, Silhouette found that her powers had increased to the point where she could now teleport other beings and objects, although it is painful and leaves her exhausted. While she cannot conjure shadows herself, she can now manipulate existing shadows, warping their size and shape to take physical form as tendrils, shields or shrouds to engulf others in darkness. Since her powers rely on darkness and shadows, they are highly susceptible to high ambient luminescence or concentrated light energy. She can also now become ‘living darkness‘, and can cause extreme pain by phasing through the bodies of her enemies. Like her brother Midnight’s Fire, Silhouette also has enhanced speed, strength, agility, and sensory perception. She is a superb hand-to-hand combatant and capable martial artist, and master of an unspecified martial art.

Paraphernalia/Weapons: The cybernetic implant in Silhouette’s spine allows her to move her legs through precise neurological impulses from her brain. The implant however does not grant her “feeling” in her legs. Originally, Silhouette utilized a special pair of combat-capable crutches and leg braces that both had hidden electric tasers and anesthetic needle injectors that delivered paralytic chemicals. These crutches are now in the form of retractable braces in specialty arm gauntlets.