September is rolling along and Nu-Perspective is at it again. This month’s theme is a dedication to THE NEW WARRIORS!!!  Our next entry is the underutilized character AEGIS. Be sure to Google his original look and story, and let us know if you like what we did with him. Then see ya sooner than ya think with another Nu-Perspective. 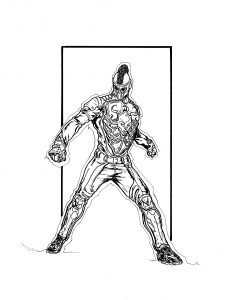 Story: Fascinated by Greek and Roman mythology since his youth, Trey was serendipitously gifted a mystical breastplate of Aegis by the goddess Athena herself, which rendered him virtually impervious. He kept the object and designed a costume to become the superhero Aegis. He began fighting small crimes but soon found himself alongside the New Warriors against The Negative Zone‘s inhabitant Blastaar. After the heroes’ victory, Aegis was rewarded with membership in the New Warriors. But tragedy would strike soon after the infamous Stamford incident which saw Aegis marked by the government. Later, tricked into leaping out a window by the Huntsman, and falling to his death, Trey was seemingly abandoned by his patron goddess Athena. Trey’s good deeds and connection to the Olympic pantheon would however eventually gain him favor to be allowed back to the mortal plane without his post-death memories. Now confronted by a world years after his death, Trey finds the Aegis breastplate fused to his body permanently, and again, by serendipity he is found by his old leader Nigh Thrasher, on a crusade to bring back the New Warriors to their former glory and purpose. With this new lease on life, Trey hopes to bring honor to his patron gods, unbeknownst he may in fact be their pawn.

Powers/Abilities: In his previous life Trey has no innate powers, in his resurrected form Trey’s new body is enhanced and is stronger, faster and more durable than the average human. All of his abilities come from the Aegis Breastplate, an enchanted armor piece that generates a virtually impregnable force field around its wearer, which can be enhanced by the wearer’s bravery, theoretically allowing it to take blows from the likes of the Hulk, Juggernaut, and even Galactus. Using the Aegis breastplate his strength is increased to unknown levels. The armor can also absorb, redirect or reflect energy blasts as well. The force field can be consciously extended to encapsulate other objects/persons, the limits of which are still unknown. The Aegis also has an auxiliary ability to allow the wearer to instantly transport from the mortal plane to anywhere on Earth or within the extradimensional realm of Olympus, such as Mount Olympus itself or Hades.