Back like we never left. Welcome to another edition of Nu-Perspective, the column featuring redesigns and updates of various Nubian (black) comic book characters. The aim of this column is to spotlight underdeveloped, underutilized and all-but-forgotten black characters specifically, and showcase them in fresh, contemporary and exciting ways both visually and story-wise.

And as we get April underway, we count down to what will no doubt be the biggest superhero movie to date. Yes, Black Panther 1.5!!!!! Umm…sorry, we meant Avengers: Infinity War. And for this month we’re spotlighting 2 potentially awesome Avengers. First up, GOLIATH!

Google his original look and story, and let us know if you like what we did with him. See ya in 2 weeks with another Nu-Perspective.

Story: Nephew to the original Black Goliath, Tom Foster genuinely believed the Avengers’ unchecked and unopposed power to be a threat to humanity and were responsible for his uncle’s death. Having adopted the mantle and powers of his deceased uncle, Tom lent his hand working for the super-powered aftermath and collateral damage cleanup crew, Damage Control, and later the ill-fated anti-Avengers team, the Revengers. Having recently been paroled from the Cellar for his good behavior and his actions during a failed prison break, Tom underwent counseling and gave up his vendetta against Earth’s Mightiest Heroes. He was later approached by Captain America to join the ranks of the new Avengers team with a rotating cast.

Powers: Having further deciphered Pym Particles, which are now interwoven with his very DNA, Goliath’s mastery over size manipulation rivals that of Hank himself. Not only can he grow to unrivalled gigantic size and shrink to near atomic level, he can also enlarge and shrink objects with a touch. Having analyzed how growing to gigantic proportions can be more of a hindrance and cause more collateral damage than intended, Goliath prefers to grow no more than 12ft. However, with his increased control of Pym Particles he can now augment his strength and density to near Hulk levels, making his height cap irrelevant. Goliath can also become intangible, although both forms of density are for a limited time only. 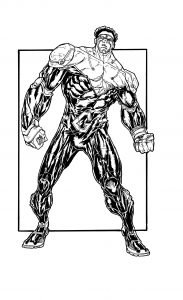