To finish off February (aka Black Panther month) we decided to focus on another character from the BP universe. Enter “Salamander K’ruel”. In the past continuity of the character, Salamander was one of the Wakandan agents working for Erik Killmonger during his original attempt to overthrow the Black Panther. He was an archer with explosive arrows who was mutated by the Great Vibranium Mound; so his body now grew thorns out of giant blisters. Salamander gets the Nu-Perspective below.

Check out his original look and story, and let us know if you like what we did with him. See ya in 2 weeks with another Nu-Perspective. 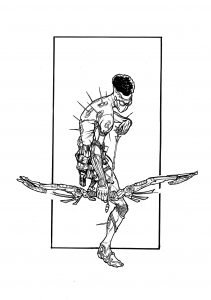 Base of Operations: Primarily Wakanda; Mobile

History: Formerly an agent of Eric Killmonger, K’ruel became a fugitive of Wakanda after Kilmonger’s defeat. He was always viewed as a pariah due to the hideous mutant barb-ladled boils that covered his body, and after years of despair he returned to Wakanda to beg for amnesty and the promise of a cure. In return, Salamander provided valuable information on other Wakandan conspirators he was once affiliated with, leading to a numerous arrests and a safer nation. After serving a reduced sentence for his crimes, Salamander was inducted into a black ops branch of the Wakandan Hatut Zeraze special task force, with the sole purpose of carrying out covert mission under the auspices of Wakanda’s geo-political interests. Although Wakandan science has helped with some of K’ruel’s physical condition, his isolation and self-loathing has made him very temperamental, causing him to act out with extreme force on occasion.

Powers: K’ruel is a Vibranium Mutate whose body was covered with festering boils which inject a toxin covered razor sharp pins. Training and Wakandan science have made Salamander skilled in launching his deadly barbs with impressive accuracy from any part of his body through precise muscle control and skin tension. He has also mastered the ability to augment their effects/symptoms (i.e. poison barbs, sleep barbs, paralysis barbs, etc). He is an exceptional hunter/tracker, an expert marksman, and is extremely proficient with a bow and arrow.