Editor’s Note: In celebration of Octavia Butler’s birthday,  a pioneer of sci-fi literature, and one of the most prolific authors to ever grace this world, we wanted to highlight a feature story which we ran a few months back. BlackSci-Fi.com contributor Amber Hubbard put together the below piece highlighting the life and many accomplishments of Ms. Butler. Check out some of our other coverage of the prolific author here.

Happy Birthday Ms. Butler, and know that you are missed.

A Profile of Octavia Estelle Butler

A look at one of science fiction’s greatest creators.

We all have dreams of breaking into an industry and turning it upside down, or creating something never seen or heard of before.  During the 1970’s and ‘80’s there was one woman who would destroy that barriers of sexism and racism in the field of science-fiction writing that was dominated by white males and her name was Octavia Estelle Butler. 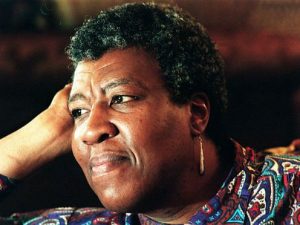 Born on June 22, 1947, Butler was a young black woman who faced challenges early on aside from the obvious and hardest obstacles of color and gender. She was also uncontrollably shy and suffered from slight dyslexia. These appeared to have been a blessing in disguise because she was forced through self-doubt and bullying to withdraw into the confines of her local library in Pasadena, California. It was inside these very walls that Butler realized that she loved reading and she started her first recordings of her writings in her “big pink notebook”. Butler then at the age of 10 decided that she would be a writer and confirmed that decision by asking her mother for a typewriter.

As she continued down this path of writing she came a across a film by the name of Devil Girl from Mars in 1954. She then decided that she could write something better than that and proved it later in her life with the Patternist novels she came up with. She did have some steps and stories to tackle before she would release Patternist. One such step was at age 13 when she asked a teacher by the name of Mr. Pfaff to type her first manuscript that she submitted to a science fiction magazine. The motivation for such an early conquest was due to a family member who was faithless in the ability of people of color to become well known writers.

Butler kept pursuing her dream of writing with each decision she made and opportunity she took, and she began attending Pasadena Community College. Still forging a path to success at every turn, Butler won a short story contest at the school and graduated in 1968 with her Associates of Arts Degree. An associate’s degree was not the end of education for Butler and she then enrolled into California State University, while also taking writing classes through an extension of the University of California Los Angeles. That decision led her to the next opportunity in the form of an Open Door Workshop of the Screenwriters Guild of America West program where Butler met and intrigued through her writings, Harlan Ellison. Ellison was a teacher for the workshop, but also a well-known science fiction writer. This meeting with the noted author led her to attend a six-week workshop with the Clarion Fiction Writers Workshop West. Butler continued to garner attention from writers and directors alike in the workshop and eventually sold her writings of  Crossover to Robin Scott Wilson the director of Clarion, who then had her work published in the 1971 Clarion Anthology. 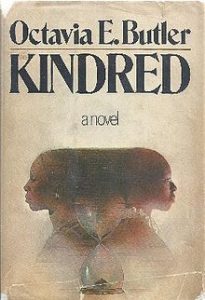 The recognition that all writers crave came for Butler in 1979 with her bestselling novel Kindred. In 1984, the short story Speech Sounds won the Hugo award, and following that victory Butler won the Hugo award again as well as the Locus Award and the Science Fiction Chronicle Reader Award for best Novelette with Bloodchild.

Not letting that fire go that was propelling her towards her dreams, Butler then followed up with the Xenogenesis Trilogy: Dawn in 1987, Adulthood Rites in 1988 and Imago in 1989.

Butler continuing on her road to success, producing the works Parable of the Sower in 1993 and in 1995 yet again winning the long-coveted John D. and Catherine MacArthur Foundation Fellowship. This was an award that gave recipients a prize of $295,000. Butler was the first science-fiction writer to have received it. Unable to be stopped at this point Butler published Parable of the Talents in 1998 which won the Science Fiction Writers of America’s Nebula Award. 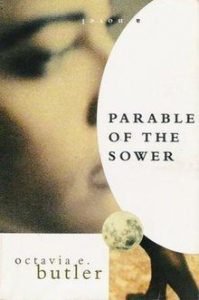 Parable of The Sower

After losing her mother and due to the nature of the books being depressing, Butler was unable to keep the momentum going with her Parable novels and chose to switch gears even amidst her declining health and created her last novel Fledgling in 2005.

Butler, although being formidably one of the best science fiction writers to ever live did not consider herself to be a science fiction writer. She was often categorized as such, but she was just a writer with three loyal audiences as she put it; of black readers, sci-fi fans and feminists.

Butler, fully aware of her surroundings and obstacles since childhood, was not one for holding her tongue by this time. She was more outspoken through her writing and well as in some of her interviews. She was always imparting knowledge when she spoke and some of those statements changed the way people thought and their desires to write.

“Why aren’t there more Science Fiction Black writers? There aren’t because there aren’t. What we don’t see we assume can’t be. What a destructive assumption,” Butler wrote in Octavia E. Butler: Telling My Stories.

She was also known for speaking on the evils of racism and discrimination in writing as quoted in the interview anthology titled Conversations with Octavia Butler. She stated, “The norm is white and, apparently, in the view of people who see things in that way. For them, the only reason you would introduce a black character is to introduce this kind of abnormality. Usually, it’s because you’re telling a story about racism or at least about race.”

Butler’s work has even caught the attention and admiration of comic authors and artists such as Damian Duffy and John Jennings, who in January 2017 published an adaption of Kindred by Abram Comics Arts. The inspiration does not stop there because producers Ava Duvernay, Charles D. King and writer Victoria Mahoney are in the process of adapting Dawn for television which would be a first for Butler’s works. The perseverance and determination that Butler showed has paved the way for many including such writers as Nnendi Okorafor author of the Binti trilogy.

Butler was an inspiration even after her death for not only black writers, but women as well, and her work continues to inspire people of color in the way she hoped that it would, according to her personal journal that was on exhibition at the Huntington Library in San Marino, California in 2017. In her journal, Butler clearly writes her goals and aspirations into existence such as “I shall be a bestselling writer”, and “I will send poor black youngsters to Clarion or other writers workshops,” She has done just that.

Amber T. Hubbard is a writer, journalist and creator of Kasiah: Mother Nature Incarnate a comic which is coming soon. She was also featured in Sheena Howard’s Encyclopedia of Comics, and has been writing since she was 12 years old. Writing is more than just an occupation, it is a passion for her.