Quantum and Woody created by MD Bright and Priest

Quantum and Woody! #7 is a cerebral journey that is largely devoid of action, but still overflows with substance and excitement. The characters of Eric and Woody Henderson are adoptive brothers that have distinct personality differences yet share a unique bond of superhuman abilities, but those abilities come at the cost of hitting strange metal wristbands together every 24 hours to avoid dying.

This issue finds our heroes after failing to touch wrists and the consequences of that action. Our story opens to find Eric as Quantum, unmasked and flying around like a knock off Superman saving the city of San Francisco. By doing this he introduces the world to the first super powered being. Woody Henderson is also seeing this all for the first time, or so he thinks, and is fascinated by the idea of superheroes. But somewhere deep down, Woody knows that something is very, very wrong.

The personality differences between Eric and Woody are highlighted in the issue, as Eric comes off as the more principled, honorable brother, whereas Woody is a gambler, drinker, and womanizer. However, from the reader vantage point one can see how Eric’s unchecked idealism can quickly turn sinister, and how Woody’s skeptical, questioning eye drives home the fact that there is an underlying problem hidden beneath the surface.

I love the artistic style of this book. I would like to note the specific detail in the faces of each individual character. For example, there is a scene where Woody is sitting at a poker table. Each of the non-essential characters that are drawn in that panel have just as much detail given to them as Woody.  One gets the sense of assorted styles and textures in each person’s hairstyle and the colorist does an excellent job of keeping the scenes bright and vibrant, giving the story and almost too surreal color pallet adding a sense of wrongness to the story. Things then take a turn to the bright reds and stark blacks of the ending, tying together an excellent read from start to finish. For anyone looking for a new comic series to get in to, I recommend Valiant Entertainment’s Quantum and Woody. And by the way, you can find issue #1 for free here. Happy reading! 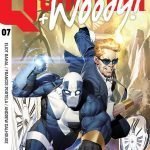